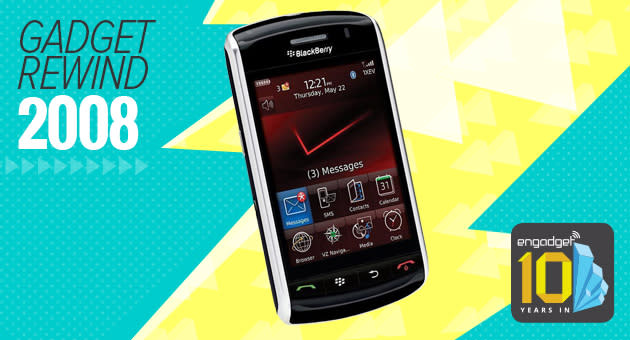 Smartphone makers were still reeling from the arrival of Apple's touchscreen-only iPhone when 2008 rolled around. Research in Motion (RIM), a mobile manufacturer best known for its BlackBerry line and QWERTY keyboard prowess, was at the top of its game and primed to jump into this emerging form factor. That year, it launched the BlackBerry Storm smartphone -- a direct rival to Apple's handset.

As RIM's premier effort in touchscreen smartphones, it offered an interesting spin on the interface with what it called SurePress. This was a touchscreen you could depress or click; an innovation RIM hoped would bridge the gap between the company's current physical keyboard-accustomed clientele and the next generation of smartphone buyers. The Storm was RIM's attempt to solve the "problems associated with typing on traditional touchscreens" and leverage its longtime experience with clickable keys. While the phone had a sleek and solid build, a vibrant 3.25-inch display and was backed by Verizon's network, that SurePress technology ended up doing more harm than good.

Touch-typing on a screen that required a tactile click for each letter put a damper on the fluidity and speed of the messaging experience -- a con echoed in many reviews. Not only that, but also the software, BlackBerry OS 4.7, wasn't built from the ground up for touch-style navigation, making the experience far from intuitive. It was just a hopped-up version of the previous operating system that had powered QWERTY- and trackball-based devices like the Bold. It did have some impressive media capabilities, though, offering unparalleled Microsoft Office functionality on a smartphone for RIM's enterprise customers.

Out-of-the-box, however, the Storm failed to include a way for Mac users to sync their audio and data, a glaring omission that would have otherwise helped lure back potential iPhone converts. RIM was forced to hurriedly address this, as well as other issues, with software updates to the phone and even pushed out an improved model a year later called the Storm 2.

RIM, as they say, was "once bitten, twice shy," and it wasn't until 2013 that it once again ventured to release an iPhone-like competitor with the touchscreen Z10. The company even used that device's launch event to rebrand as BlackBerry. While the Z10 had an OS that was custom-tailored to the touch experience, the effort ultimately failed to ignite a comeback. And the results of that misstep have been haunting the company ever since.

Did you own a BlackBerry Storm? Add it to your Engadget profile as a device you had (or still have) and join the discussion to reminisce or share photos of your device with other like-minded gadget fans.

In this article: 10yearsin, apple iphone, blackberry, blackberry bold, blackberry storm, bold, engadget10th, engadget10yearsin, gadget rewind, gadgetrewind, gear, iphone, mobile, research in motion, rewind, rim, storm, storm 2, surepress, suretype
All products recommended by Engadget are selected by our editorial team, independent of our parent company. Some of our stories include affiliate links. If you buy something through one of these links, we may earn an affiliate commission.