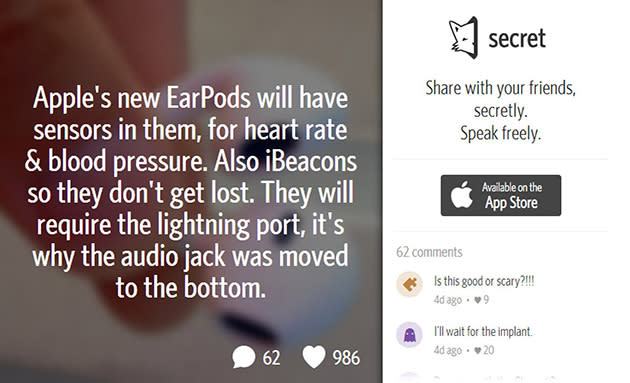 Remember a couple of days ago when the internet was going all frothy-mouthed over a rumor that Apple would be releasing new EarPods with iBeacon integration and built-in heart rate sensors? Well, turns out to have been a rather poorly thought out joke -- one that just happened to jibe with past rumors. The source of the supposed leak came clean about the hoax and apologized for, well, everything. For putting it out there in the first place, for failing to correct sites that reported it as fact, for failing to reach out to people who contacted him to confirm his story -- basically for letting the entire thing spiral out of control.

The leak started as a post on Secret, the anonymous social network that gives people a safe place to confess their deepest, darkest secrets. The culprit in this case claims to have been experimenting with it as a platform for telling jokes and dreamed up this whopper while sitting on the can one morning. (No seriously, this is one guy's take on literal bathroom humor.) With zero sourcing or any concern about what might happen if someone thought it was a legitimate leak he posted the following:

Apple's new EarPods will have sensors in them, for heart rate & blood pressure. Also iBeacons so they don't get lost. They will require the lightning port, it's why the audio jack was moved to the bottom.

Apparently the lack of sourcing and complete anonymity didn't bother most of the internet, which turned into an over-zealous echo chamber. From there it was just a matter of eager reporters filling in the gaps with their own bits of conjecture, and the story took off. To be fair, Apple had filed a patent for something similar and the company recently hired Eric Winokur from MIT who specializes in wearable medical devices. But according to the person behind the Secret post, he was unaware of these details. And just to be clear he does not and never did work for Apple. But now the truth is out there and we can all go back to ignoring anonymous, unfounded rumors... or not. This is the internet after all.

In this article: apple, hoax, secret
All products recommended by Engadget are selected by our editorial team, independent of our parent company. Some of our stories include affiliate links. If you buy something through one of these links, we may earn an affiliate commission.