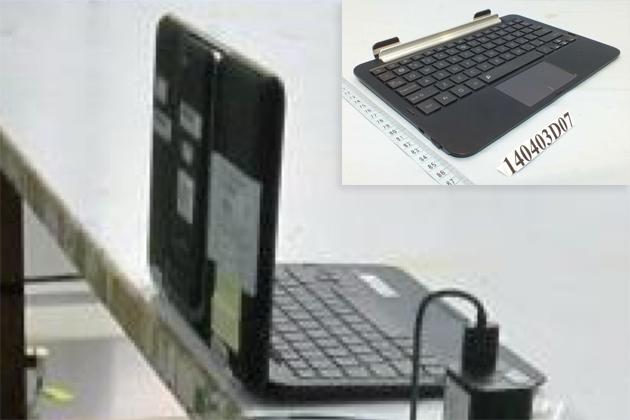 When we last hung out with ASUS CEO Jerry Shen, the exec expressed his support for bringing back the keyboard dock to the PadFones, which would mean you'd get three form factors with one product: a phone, a tablet and a laptop. Now, we have a leak confirming that this is definitely in the works. Courtesy of an FCC document dug up by our friends at Mobile Geeks, we're looking at an "ASUS Mobile Dock Keyboard" (PF-06 or "TransBoard") which, for a change, uses Bluetooth instead of a physical docking interface.

Judging by the above blurry photo plus its matching 25cm width, the dock appears to be designed for (and lab-tested with) the upcoming PadFone X for AT&T. However, the lack of locking mechanism suggests it might accommodate other similarly-sized PadFone Station tablets as well, though there's no telling how secure the fit would be.

More interestingly, it appears that for the sake of keeping the dock lightweight, ASUS has opted to leave the bulky battery out, meaning you won't be able to charge up the phone and tablet with the dock. Instead, you'll only find a tiny 450mAh cell that powers the Bluetooth radio plus the multi-touch trackpad, and you'll need to charge it up separately via the dock's micro-USB port. And of course, there's no SD slot here, so you'll need to rely on USB OTG to plug in a memory card.

Despite some missing features compared to the original keyboard dock, we're certain that this is still music to the ears of PadFone fans. We should hear more at Computex early next month, so stay tuned.

In this article: asus, bluetooth, fcc, keyboard, leak, mobilepostcross, padfone, padfone6, pf-06, tablet, transboard, wirelesskeyboard
All products recommended by Engadget are selected by our editorial team, independent of our parent company. Some of our stories include affiliate links. If you buy something through one of these links, we may earn an affiliate commission.