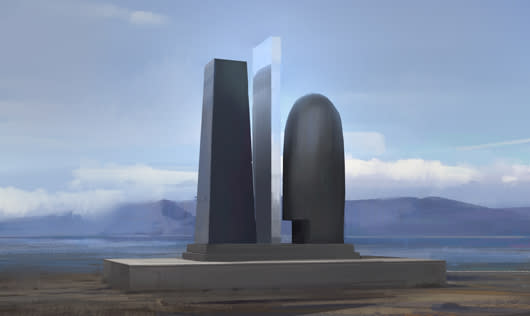 So how long did you expect EVE Online's big player monument to be up before people began screwing with it? As it turns out, the correct answer was "four days." A player took to Twitter announcing that he had vandalized the monument over the weekend, scratching out the name of player Xenuria. Whether or not this is a good thing depends largely on what rumors regarding Xenuria you believe.

The alleged vandalism, which apparently took place during this weekend's EVE Fanfest. It certainly sets an unpleasant precedent and opens the door for further vandalism within the game's historically contentious playerbase; one can only hope that this is addressed and corrected. CCP Falcon has addressed the situation on the official forums; we've included the relevant bits below.

This is damage of public property in the City of Reykjavik. The police have been informed, and investigation is ongoing. This is not a laughing matter, and will be dealt with as a criminal offence. We are currently reviewing security footage from a number of surrounding buildings.

People will stop attacking the victim of this on our forums. It's not funny, it's not clever. Take your rumor mongering and personal attacks away from our community. If you choose not to, you'll be removed from the community, permanently. It's a simple as that. We will not tolerate victimization.

What's happened is absolutely disgusting. It's an insult to the entire community and is clearly the work a person who believes that behavior in a virtual world is a valid reason to make a real life personal attack on someone, and deface public property.

We will not tolerate this.

Thankfully we've already had a number of players come forward to assist us and provide information. Including, we believe, members of the person's own alliance.

Thankfully the vast majority of the rest of the community are in the same frame of mind as CCP - disgusted at the fact that someone would do this, and we're extremely grateful for your assistance.

With that in mind, I'll make a simple one time offer, that if the person who defaced the monument wants to come forward and contact me relating to this, then they can do so by EVE mailing my Dev character. If this happens, we'll take it as a gesture of good faith after an extremely stupid act that was committed.

In this article: eve, eve-fanfest, eve-fanfest-2014, eve-online, eve-online-fanfest, eve-online-fanfest-2014, event, event-coverage, fanfest, iceland, massively-event-coverage, monument, news, news-items, player-monument, reykjavik, vandalism
All products recommended by Engadget are selected by our editorial team, independent of our parent company. Some of our stories include affiliate links. If you buy something through one of these links, we may earn an affiliate commission.