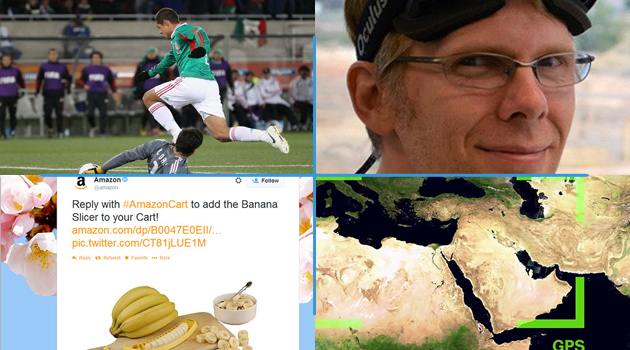 Remember that fresh new pair of kicks you just tweeted about? Well, thanks to Amazon, adding them to your virtual shopping cart can be as simple as sharing a link with the #AmazonCart hashtag. Modern science opens new possibilities every day, including the ability to locate your ancestor's village of origin. And thanks to researchers in the UK, all it takes is an Ancestry.com account and simple DNA test. The FIFA World Cup begins in just over a month, and thanks to the WatchESPN and WatchABC apps, you can catch the action most anywhere. What's more, the sports network is also launching a redesigned ESPN FC for mobile and desktop, making it much easier to keep track while at work. Amirite?

In this article: amazon, amazoncart, dna, espn, gps, john carmack, oculus vr, rift, science, tdr, VR
All products recommended by Engadget are selected by our editorial team, independent of our parent company. Some of our stories include affiliate links. If you buy something through one of these links, we may earn an affiliate commission.