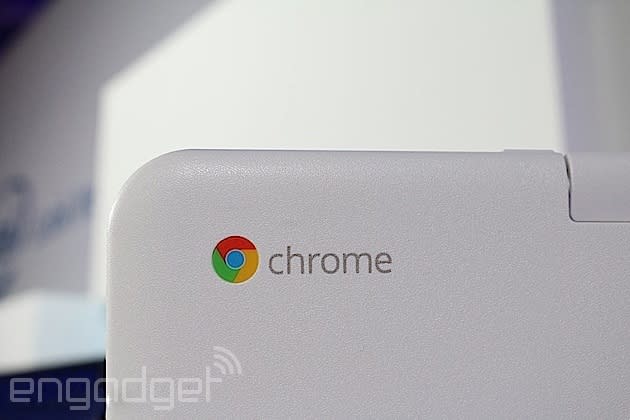 If you haven't picked up a Chromebook just yet, you might want to wait a little longer. Intel has just announced plans to roll out as many as 20 new Chromebooks by the latter half of this year. This new set will be thinner, lighter, more powerful and generally more diverse in terms of design. It's clear that Google is making a play for the mainstream.

Most of the new class of Chromebooks will be based on Intel's more powerful and efficient Bay Trail-M system on a chip.

"Bay Trail is optimized for power, performance and cost," Intel's VP and general manager, Navin Shenoy, said. "They're the first Chromebooks that are also now available with over 11 hours of battery life, which is up from about 10 hours on Haswell."

The Bay Trail models will also be the first Intel Chromebooks to be fanless, he said, and will be 15 percent lighter. In terms of design, we can expect to see more diverse form factors. Some models will offer touchscreens, and some, like Lenovo's offerings, will have a folding display. In addition to those Chromebooks, Intel also introduced a tiny HP Chromebox desktop and announced the availability of LG's all-in-one Chromebase computer. Last but not least, Shenoy also announced that all of the Chrome devices released today will be made with the world's first "conflict-free" microprocessors -- meaning the minerals of which they're made were not mined by slave regimes in the Republic of Congo.

At least a couple of those conflict-free laptops will utilize chips based on the company's Core i3 processor, including an Acer version, available for $349 this summer. An updated version of Dell's 11-inch model should ship later in 2014, as well. As we mentioned, Intel is partnering with at least four major manufacturers -- Acer, ASUS, Lenovo and Toshiba -- to produce Bay Trail-powered devices. Lenovo announced two of these last night: the N20 and N20p. Not to be left out, ASUS also rolled out a couple of new offerings. There's an 11.6-inch C200 and a 13.3-inch C300, both of which will begin shipping this summer.

Just prior to announcing the latest in the Chrome OS family, Caesar Sengupta, VP of product management at Google, took to the stage to say that their predecessors have been well received.

"Chromebox is the number one selling desktop," he said, "And the top six rated laptops on Amazon are all Chromebooks. They're both the highest rated and the most affordable."

He and Shenoy pointed out that eight of the top computer manufacturers offer Chromebooks, and that Chrome devices are available in over 20 countries and nearly 10,000 schools. And you can expect more markets and institutions set to get Chrome OS machines in the future. In fact, Shenoy showed off an education-focused Chromebook reference design that he hopes will inform the next generation of Chromebooks for schools.

As a cherry on top, Sengupta told us that not only are Google Now and voice commands coming to Chromebooks, but that Play movies will be available to view offline as well.

According to Sengupta, "the momentum is solid and gathering pace." So folks, at least according to Google, we'll be seeing a lot more of you buying (and using) Chromebooks in 2014.

In this article: acer, asus, chromebooks, chromebox, chromeos, google, intel, lenovo, lg
All products recommended by Engadget are selected by our editorial team, independent of our parent company. Some of our stories include affiliate links. If you buy something through one of these links, we may earn an affiliate commission.