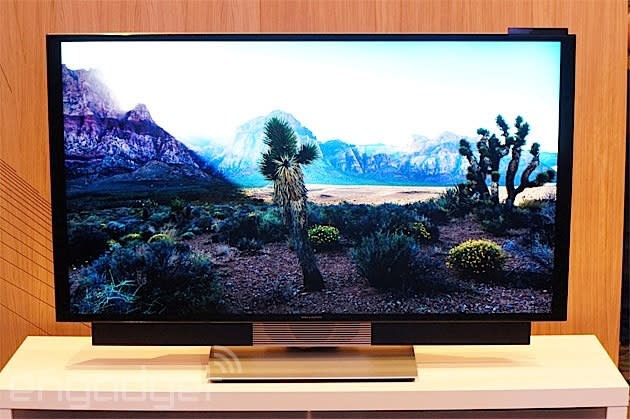 ​As a group of journalists huddled together in a function room, deep within a central London hotel, a wide, framed display stands before them. Walled on three sides, a long, Bang & Olufsen-branded curtain hangs across the front-facing section -- clearly hiding whatever product the company has gathered them there to announce. The host spares everyone a long intro, the curtain dramatically drops (was there a small theatrical "pop"? We can't be sure.). As the veil falls to the ground, three fancy looking television sets are revealed, they spring into life, revolving on their stands as if slowly lurching towards the audience. A short, lively video plays. The demo finishes to one, well-intended, solitary clap. Hanging above the TVs, right in the middle it reads: Bang & Olufsen BeoVision Avant "The one that moves." On each screen, as if by way of clarification, the words "Movement with purpose" are displayed. This is how the Danish firm introduces the world to its new 55-inch 4K TV. The one that moves. It turns out, the references to movement and the animated demo, aren't just about attention grabbing. The Avant is a TV that actually moves. The rotating stand not only points the TV in your direction (as other sets from the firm have done), but brings it away from the wall, towards the viewer. It's as if it comes away from the wall and commands your attention, before retreating back and hiding itself away. But, here's the catch: only if you buy the additional motorised stand (a modest $2,000/£1,200 on top of the $8,000/£6,000 TV set). What does that big ticket price actually get you? Well, 4K/UHD, and integrated "three channel" stereo (basically stereo, plus a central speaker for speech), Spotify and Deezer integration, WiFi, 6 x HDMI ports and support for WiSA / wireless audio. The Avant's built in speakers are all part of the movement agenda too. When you switch the set on, they emerge from below the screen, before stretching out to extend most of the length of the bottom.

During the demonstration, a host of other neat tricks are shown. The BeoRemote One, for example, (Bang and Olufsen's universal remote) is given its own mini presentation. It can control everything in your front room, and has three hot buttons that automatically switch the Avant on with your favorite settings and/or channel (mom, dad, and the kids can each get their own). The Avant will also let you control other devices (cable box, PlayStation etc.) directly -- even if the actual box is tucked away in another room.

A guy keeps taking pictures of the exceedingly crisp and vibrant display with his iPad, while a demo of the Avant's smart speaker configuration takes place. Basically, if you have a surround sound system connected, but decide to enjoy some internet radio through it instead, and move it to face another part of the room, it will automatically reconfigure the relevant speakers to feed stereo sound in the appropriate direction. Similarly, a host of sensors measure the ambient light and even room color to automatically adjust the TV's image reproduction to Bang & Olufsen's optimized settings (should you so desire). ​
As you might imagine, being a Bang & Olufsen product, it's not bad to look at. The sharp design is typical of the Danish firm, and would likely fit seamlessly into most front rooms. The Avant is clearly Bang & Olufsen's flagship screen, and the laundry list of software features (which we're reminded can and will be regularly updated) might make it a compelling proposition. But, will the eyebrow-raising price tag not put it out of reach for many aspiring customers? As for the kinda Joe who's got that sort of change to lay down on a television without thinking, would they send it this way? Even it it moves? Well if they would, they can do so globally starting today.
In this article: avant, bang and olufsen, BangAndOlufsen, BangOlufsen, beovision, BeoVision Avant, hands-on, hdpostcross
All products recommended by Engadget are selected by our editorial team, independent of our parent company. Some of our stories include affiliate links. If you buy something through one of these links, we may earn an affiliate commission.