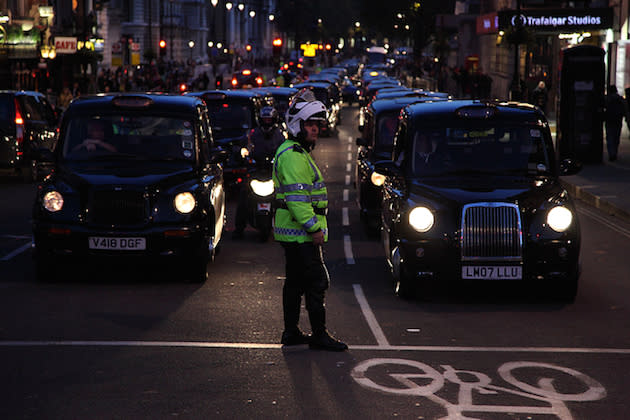 Uber's no stranger to disputes with traditional taxi firms in Europe; it's already been banned in Belgium and French lawmakers want to take its tracking tech and hand it over to regular cab firms. Discontent has been growing the other side of the Channel too, as drivers of London's iconic black cabs appear set to cause "severe chaos and congestion" by blockading many of the city's streets in June. For the Licensed Taxi Drivers Association (LTDA) the issue is simple: it says Uber's drivers are using smartphone apps to calculate fares, which they believe is illegal because private vehicles are not permitted to be fitted with taximeters. Uber's apps actually use GPS data to work out the distance travelled and time taken, which isn't illegal, despite the LTDA's groans. Transport for London doesn't want to get involved as it doesn't believe the law has been broken, but that won't stop the LTDA from seeking a judicial review. Although TfL appears to back Uber's presence in London, it says no final decisions have been made and the company's model is "still under investigation."

In this article: black cab, cab, gridlock, london, taxi, uber
All products recommended by Engadget are selected by our editorial team, independent of our parent company. Some of our stories include affiliate links. If you buy something through one of these links, we may earn an affiliate commission.