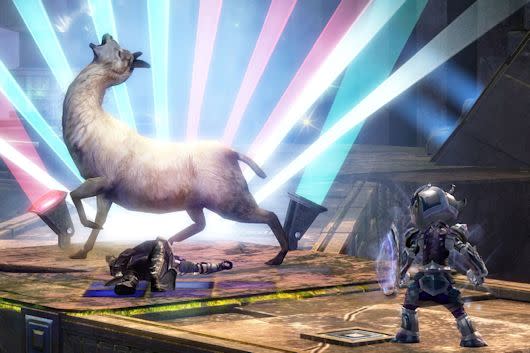 Back in March, I spent an entire Working As Intended column discussing the game mechanics that Guild Wars 2 got right. But that's just one side of the story. In order to be completely fair to the game and to myself, I want to grump about the things it got wrong. Don't take this as utter condemnation for the MMO; we're most critical of the things we love precisely because we love and know them so well and want them to be so much more. And in spite of all the things I love about Guild Wars 2, it's far too often living in the shadow of its older sibling.

The world feels so small

Don't think I'm going to pick on the travel system here; I love it and wouldn't change it one bit. Fast travel makes worlds feel bigger and more explorable to me, not less. But what we're playing in is such a small part of the Guild Wars world that I feel hemmed in. Guild Wars 2 touches only the smallest part of the full map realized in the classic game, and whenever I scroll around looking for a zone to visit, I feel the lack of Elona and Cantha, never mind Prophecies' Crystal Desert, profoundly. And the map size isn't the only problem; we're still missing tangible and intangible chunks of the cultures those campaigns introduced, from the gear available to the naming conventions of the NPCs. Consequently, the current gameworld suffers from the same sort of generic western fantasy trope that Prophecies did before it was so gorgeously fleshed out by Factions and Nightfall.

I know ArenaNet is sick of hearing this and that the word "Cantha" is probably a curse that makes developers cringe, but Guild Wars 2 very much needs an expansion. The ongoing living story has been an unappealing, segmented, haphazard arc for the game to follow, and frankly, I think it shines a harsh light on the game's biggest weakness rather than builds on its strengths. There's a reason Trahearne is almost universally mocked: The game's personal story is just not compelling, not compared to other story-driven MMOs and definitely not compared to the top story-centric single-player games. The living story has been consistent only in players' disdain for it, and ArenaNet's focus on lengthening the game's story via episodic content patches rather than on expanding its world significantly via campaign or expansion has done two things: keep the playable gameworld small and provoke concern that the game lacks ambition (or lacks the funding to finance ambition, which is worse).

Massively's Anatoli Ingram earlier this week prophesied that the next stage in the living story will combine with new zones in classic Maguuman territory. I hope he's right.

Another reason the game feels small is the lack of upscaling. Players still downscale to lower-level zones, such that a level 80 can play in a level 10 zone and still find appropriate challenges and rewards. It's not perfect, but it works and every game needs it. Unfortunately, upscaling of the sort introduced in games like City of Heroes was originally promised for Guild Wars 2 but was nixed in closed beta. The practical result of that cancellation is that low-level characters are terribly limited in where they can level up. If you have a roster of eight characters spanning many levels, you will likely duplicate the lower-level zones multiple times and seldom visit most of the more elite leveling areas. A lowbie looking for something new must still plug through the starter zones thanks in part to the linear story that wants to lock him in and not let him try out a zone his player has yet to experience. It's a strange juxtaposition that made more sense for classic Guild Wars' linear and not-so-optional mission line, and if GW2 isn't going to create large new mappable zones for us to explore, I wish it would just make the existing ones more easily accessible by newer characters.

There are no henchies or heroes

The "group-with-me-or-you're-doing-it-wrong" gamers hated henchies and heroes in Guild Wars because henchies and heroes ensured that people who didn't want to group usually didn't have to. The result was a game where people who wanted to group could and people who didn't could deck out their minions and go about their business, completing most of the mundane, normal-mode campaigns at their own speed and with their preferred builds (rather than being expected to rush through cutscenes and run a specific meta build or else). Even most normal mode dungeons could be completed in this way or with a small group, but in Guild Wars 2, we have no such choices for gameplay or customization, just the irritating NPCs who dominate our "personal" stories and do us only the favor of dying. Repeatedly.

And let's talk about those dungeons, shall we? Specifically, let's talk about small group play. Guild Wars 2 shines in large-scale play; the open world revolves around it, and it's fun and fulfilling, and oh, the particle effects in a glorious zerg! It's exactly the kind of throw-everyone-together-and-kick-butt raiding I love in MMORPGs. But in a five-man dungeon setting, the problems created by ArenaNet's particular attempt to extinguish the holy trinity are brought into sharp focus. Small group dungeon gameplay is an obnoxious exercise in flopping around trying not to die and hoping that your AoE support skills land somewhere useful, not in methodical or skillful execution of team tactics, as you'd expect. Grouping at that level feels more like grouping in any game before 2003 not named EverQuest rather than like playing a game that ought to have taken World of Warcraft's utterly polished and controlled group play and married it to City of Heroes' cheeky and brilliant downplaying of the trinity.

The gear and lockbox situation is frustrating

Collecting armor and weapon skins in classic Guild Wars was what I lived for, but Guild Wars 2 has trapped way too much of that metagame behind a pay wall and a grind wall, which has more than once stifled my desire to play or pay for anything. The armor available in the current gem store commits the cardinal sin of being infrequent and ugly, and the nicest in-game armor skins require specific dungeon tokens (and associated grinding) in a dramatic departure from Guild Wars, which simply required you to procure the money however you preferred, acquire the materials, and complete the requisite campaigns or maps. The weapon skins are even worse; those you can find dropped or buyable normally within the game aren't much in the eyecandy department, and the most beautiful skins require extreme grinding or the purchase of lockboxes from the cash shop -- lottery tickets that give you a chance at a drop that you can trade for something worth wielding. I know the game needs to make money somehow, but this is a huge turn-off for such a cosmetic-centric game.

The cash shop offerings themselves continue to stump me. I can understand buying gold, but I don't know who buys llama finishers (see the top image) or weak consumables or overpriced eternal harvesting tools or chef hats or lockbox lottery tickets for weapons and dyes and minipets. Yuck. I am never even tempted by these things. I want to support the game, and when I open up the cash shop, I am there to buy beautiful armor and stunning skins directly. Even better, I'd love to buy new classes, new weapon types, new skins for my minions and pets, new animations, new particle effects, new dailies options, and new explorable maps! Please let me give you my money. And let's pass on the llama finishers.

The economy is bad, and it should feel bad

While I've praised Guild Wars 2 for crafting-related innovations like crafting-from-banks and shared gathering, I have to ding the economic system on the whole for its many extant issues. The auction house is still missing basic filters, the awkward crafting system still demands a bizarre imbalance of drops, gold continues to inflate largely unchecked, and far too many crafted items remain utterly without value to gameplay, all making for an economy that isn't particularly stable or fun to navigate. Guild Wars 1 suffered similar economic woes, and far be it from me to solve inflation the way the early ArenaNet team did (by eighthing all drops mid-stream and creating an extreme class divide within the community), but as a crafter and trader by nature, I find the economic problems unforgivable.

So where's that once-promised housing?

The personal instance offered by GW2 is wholly insufficient as far as housing is concerned, and the game's lack of bare-minimum instanced guild housing once again leads me to award the win to its elder sibling when it comes to anchoring players in a gameworld by giving them a home space. With housing-heavy games like Landmark and WildStar set to launch this year and even Star Wars: The Old Republic getting a housing system come the end of summer, GW2's absent housing nudges the game into the realm of flighty, ephemeral themeparks, not secure and fully developed MMORPG worlds.

The feature pack and beyond

I have not mentioned here more recent feature pack-related stumbles by ArenaNet for two reasons: First, Anatoli is my superior in expertise on the topic, and he has already detailed his concerns with the patch. And second, every patch needs seasoning, preferably more than a few weeks of it. I fully expect GW2 to change, change back, and change again as a result of last months' additions. I hope instead to have homed in on my fundamental complaints about the game, not just my pet peeves with the nerfed dailies and the funky effects of megaserver technology. I do still love Guild Wars 2 and the franchise as a whole, and I don't just want to sandbox it up -- I want it to embrace its (and GW1's) existing sandbox nature and repair some of the irritations that keep me from wanting to truly live in it full-time the way I once lived in its classic predecessor.

The MMORPG genre might be "working as intended," but that doesn't mean it can't be so much more. Join Massively Editor-in-Chief Bree Royce every other Friday in her Working As Intended column for editorials about and meanderings through MMO design, ancient history, and wishful thinking. Armchair not included.
In this article: anet, arenanet, buy-to-play, editorial, fantasy, featured, guild-wars, guild-wars-2, gw, gw2, ncsoft, op-ed, opinion, rant, rants, working-as-intended
All products recommended by Engadget are selected by our editorial team, independent of our parent company. Some of our stories include affiliate links. If you buy something through one of these links, we may earn an affiliate commission.