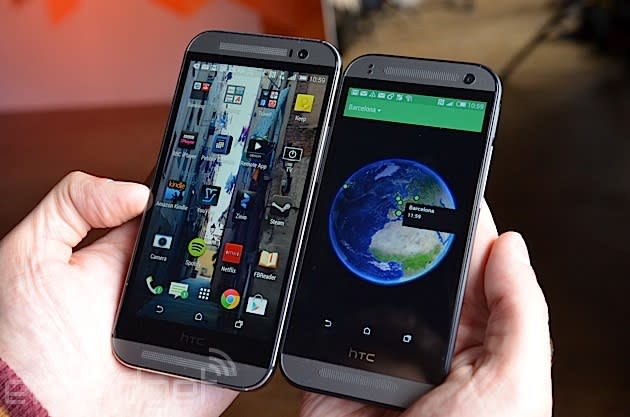 There's a lot riding on today's announcement. A smaller, cheaper, perhaps more mainstream version of the lovely (but long) HTC One M8 could be a good thing not only for phone buyers, but also for HTC itself, which urgently needs to capitalize on the M8's momentum. Well, the HTC One Mini 2 is here, and yes, its 4.5-inch display makes it significantly easier to hold in one hand, and it's certainly going to be more affordable (although we don't have exact pricing just yet). But this size-reduced handset is fundamentally different to the M8 in other ways too, especially on the inside. That's why HTC has deliberately avoided calling it the "M8 Mini," for fear of over-hyping it -- a decision that probably deserves some praise for its honesty, but which has resulted in some pretty clumsy branding. We've just been hands-on with the European LTE version of the phone (the only variant that has so far been announced), so go ahead and read on for our initial impressions and the key specs. On the subject of whether smaller phones necessarily ought to be lesser phones, it's clear that HTC doesn't agree with Sony, and it doesn't want to tread the same path as the high-specced Xperia Z1 Compact. The One Mini 2 is aesthetically very similar to its larger sibling, which is a good thing, but internally it has been downgraded in every major department, not least in relying on a quad-core Snapdragon 400 chip (with 1GB of RAM and 16GB of storage) instead of the extremely battery-efficient Snapdragon 801 in the M8. On the other hand, those upgrading from a last-gen HTC One Mini might seem some improvement in performance, but the older phone's chip was only dual-core, not quad. The One Mini 2 also drops the M8's secondary depth camera and Ultrapixel sensor in favor of a more bog-standard, 13-megapixel module -- not a bad switch, perhaps, to those who regard HTC "Duo Camera" as a gimmick, but to our minds it's a serious compromise that results in obviously worse low-light performance, and frankly we'll miss the M8's fast and enjoyable selective-focus effects. Then again, other key parts of the HTC One experience are very much present and correct in this smaller model. That includes the generous dollop of aluminum that makes up much -- although not all -- of the phone's chassis, and which is a huge help in giving the phone a premium air. The 720p LCD display (not 1080p like the M8) stood up well during our limited time with the phone, and the pixel density is fine. There's room for a microSD drawer (phew!) as well as front-facing BoomSound speakers that provide audio quality you simply wouldn't expect from a phone of this size. A healthy 5MP front-facing camera will take care of your selfies using HTC's well-designed camera app, and of course you're also going to get the same friendly, useful Sense 6 skin on top of Android, including Zoe Highlight Videos and BlinkFeed.

Expect to see the One Mini 2 in European stores from the end of this month, with the same three color options as the M8 (gunmetal gray, glacial silver and amber gold), and stay tuned for news of a US variant, which must surely be inbound soon. Meanwhile, we'll get to work on a full review to test out things like battery life -- the One Mini 2 only packs a 2,100mAh battery, but raw figures never tell us everything.

In this article: hands-on, htc, htc one m8, htc one mini 2, mobilepostcross, one mini 2, uk-feature, video
All products recommended by Engadget are selected by our editorial team, independent of our parent company. Some of our stories include affiliate links. If you buy something through one of these links, we may earn an affiliate commission.