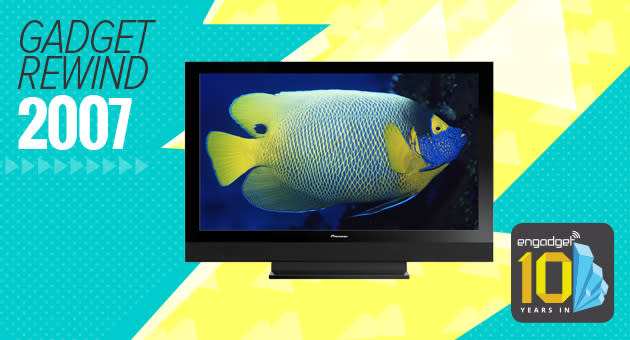 The bleeding edge for pixel-pushing displays has shifted, and 4K, aka Ultra HD, is the one to watch. Though the once-great 1080p HD specification has now become commonplace, seven years ago, it was an altogether different story. Pioneer, one of the leading manufacturers of plasma televisions at the time, chose to buck the popular trend toward pricey "full HD" sets, and instead focus on more affordably priced sets under 60 inches. But cost wasn't the only differentiator for Pioneer; it also aimed to deliver the best picture quality possible, regardless of the spec sheet. From this line of Kuro (meaning "black" in Japanese) displays arose an award-winning 50-incher called the PDP-5080HD, which sported a humble 720p resolution.

Like all Kuro TVs, the PDP-5080HD bested its competitors by producing extraordinarily deep and rich black levels. While plasmas are commonly known to produce better dark tones than an average LCD panel, the Kuro line excelled at this process. Its combination of black reproduction and smooth image processing resulted in a picture with far greater clarity, contrast and depth than other rival HD sets, and this was with its meager-seeming WXGA 1,366 x 768 resolution. It even took home first place in Home Theater Mag's 2008 HDTV Technology Face Off, beating out Panasonic's 50-inch TV and a host of other sets in the same size and price range.

As HDTVs go, the PDP-5080HD was solidly built, featuring a gloss black design that housed a removable, front-facing soundbar that allowed audiophiles to configure their own surround system. It was also feature-rich with four HDMI ports and inputs for USB and PC, as well as component, composite and S-Video connections. And for those who wanted to bypass a set-top box, the set even came CableCARD-ready.

Pioneer did eventually make 1080p an affordable standard for most of its Kuro sets by 2008, all boasting five times deeper black levels than its first wave of displays. That full HD line, however, ended up signaling the end for Pioneer's TV business. One year after its release, Pioneer decided to leave the TV business altogether in favor of a focus on car stereos and Blu-ray players. But that retirement proved to be short-lived, as the company recently made an announcement that it would be returning to the TV market in 2014. This time, though, Pioneer says it plans to stick with LCD and not the plasma panels of yore, a move that all but ensures the Kuro line will go dark forever.

Did you own a Pioneer Kuro PDP-5080HD? Add it to your Engadget profile as a device you had (or still have) and join the discussion to reminisce or share photos of your device with other like-minded gadget fans.
In this article: 1080p, 10yearsin, 4k, 720p, av, entertainment, full hd, gadgetrewind, gear, hdpostcross, kuro plasma, PDP-5080HD, pioneer, plasma, ultra-hd
All products recommended by Engadget are selected by our editorial team, independent of our parent company. Some of our stories include affiliate links. If you buy something through one of these links, we may earn an affiliate commission.