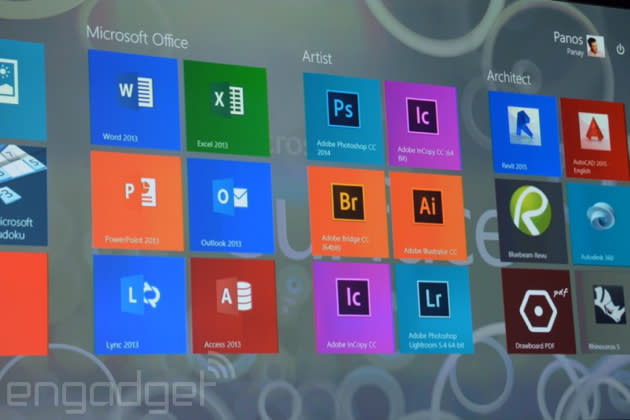 Microsoft is breaking out the big guns for the launch Surface Pro 3. It trotted out creative software powerhouse Adobe to show off a new version of Photoshop CC it's got in the works. This edition is designed specifically for use with a touchscreen and stylus. Icons and other UI elements have been doubled in size so that they're easier to tap with a free finger and gestures like pinch-to-zoom work flawlessly. And this isn't some hobbled, half-featured version like Photoshop Express or Photoshop Touch. What's more, it should be ready to support high-density displays like the one found on the new Surface. While the focus today may have been on how the Creative Cloud app would work on Microsoft hardware, it should excite avid Adobe users regardless of what brand PC they rely on. The lack of touch and high-density display support has been a bit of a pain point. And don't worry, there's "more on the way" according to Michael Goff. Besides, the tiles for other Adobe CC apps that popped up during the demo kinda gave that away. 5
In this article: adobe, microsoft, photoshop, surface pro 3
All products recommended by Engadget are selected by our editorial team, independent of our parent company. Some of our stories include affiliate links. If you buy something through one of these links, we may earn an affiliate commission.