This treadmill lets you walk in any direction 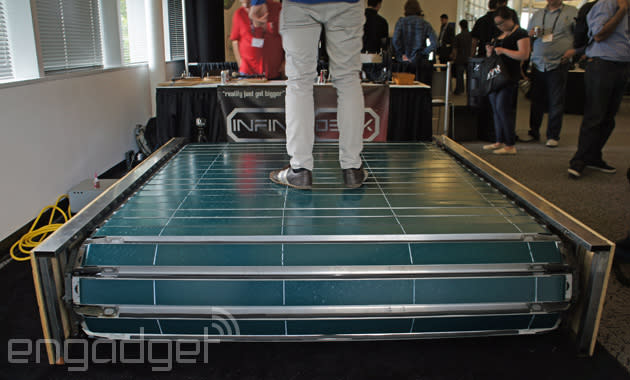 No, that's not a detached tank tread you're looking at, it's a treadmill -- and it doesn't care which direction you're walking. It's called the Infinadeck, and we found it hiding in a dark corner of the Silicon Valley Virtual Reality Expo. Each of its tank-like treads is covered in a moving belt which, when used in tandem, gives the user the ability to stroll in any direction. The omni-directional treadmill has apparently caught the attention of CBS too, as a possible prop for filming on green-screen sets, but it isn't ready: the prototype still requires an active operator to change directions. It's also quite loud. Infinadeck says its trying to secure funding to build a more compact version with motion sensors, which should automate the process. Want to see how it works? Skip on past the break, videos await.

In this article: infinadeck, omnidirectional, SVVR, SVVR2014, treadmill, virtualreality, vr
All products recommended by Engadget are selected by our editorial team, independent of our parent company. Some of our stories include affiliate links. If you buy something through one of these links, we may earn an affiliate commission.