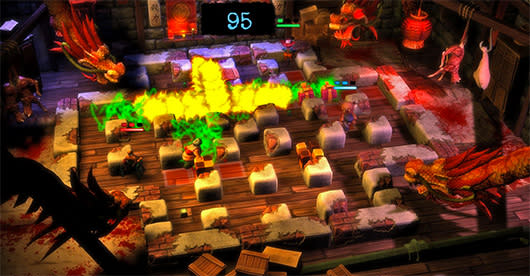 Developer Bloober Team is headed "back to the drawing board" with its downloadable PlayStation 4 game Basement Crawl, announcing plans to recreate the project from scratch following a largely negative critical reception.

Inspired by Hudson's Bomberman series, Basement Crawl is a multiplayer action game in which players compete to be the last creature standing in a series of explosive overhead-view battles. Critics were not fond of the final product upon its launch earlier this year, citing a wide range of gameplay flaws and technical issues.

"Firstly, I think that I should start this off by apologizing to those of you who bought Basement Crawl and have been waiting for us to fix it," Bloober Team's Marc Colhoun told GameSpot. "The game was a mess for both you and us."

Colhoun continued: "We have been rebuilding the game, completely from scratch and on a new engine. I know that this isn't really the way things are usually done in the industry, but I think that if you have put a bad product out to people it is your job to do what you can to fix that. Even if it means going back to the drawing board on a game that has already been released."

The remade Basement Crawl will be available as a free download for players who purchased the original version. A release date was not announced.

[Image: Bloober Team]
In this article: basement-crawl, bloober-team, indie, overhaul, playstation, ps4
All products recommended by Engadget are selected by our editorial team, independent of our parent company. Some of our stories include affiliate links. If you buy something through one of these links, we may earn an affiliate commission.