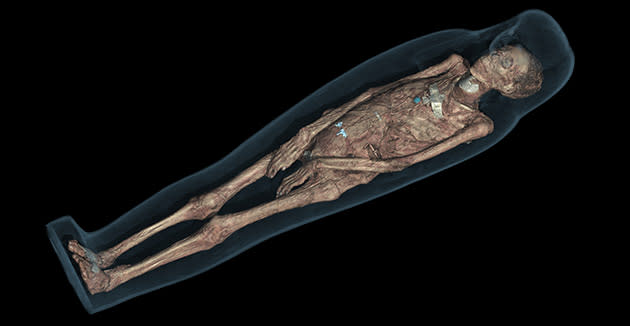 Thanks to more advanced medical CT scanners, we can now look at what's inside the British Museum's mummies... even if they remain wrapped. The museum has partnered with Samsung to provide 3D visuals for eight mummies of people who lived in the Nile Valley as far back as 4,000 years ago created using high-res CT scans. These visuals (some of them even interactive) show you what lies underneath all those mummified layers, from accessories and hairstyles that indicate their status in life, to the state of their health when they passed away. For instance, you'll see that a man of high status was buried with gold leaves and facial features painted on his wrappings, while a lowly temple doorkeeper had his severed head roughly reattached with wooden poles. The exhibit's already live for anyone interested in (digitally) peeling layers off the ancient remains, and it'll be around until November 30th this year.

In this article: 3D, 3dScanner, BritishMuseum, CtScan, history, Mummy, samsung
All products recommended by Engadget are selected by our editorial team, independent of our parent company. Some of our stories include affiliate links. If you buy something through one of these links, we may earn an affiliate commission.