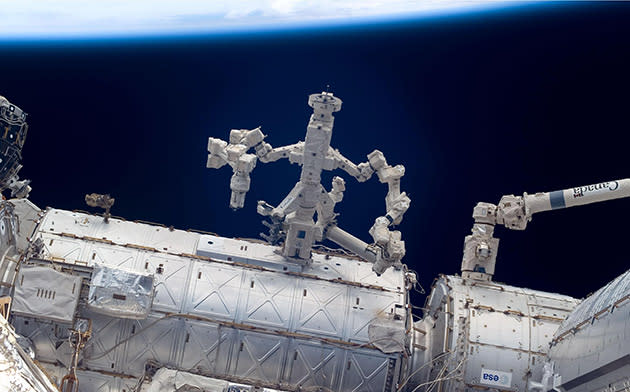 When something goes wrong with the ISS, astronauts usually don their suits and brave the harsh conditions of space to do what needs to be done. But the space station's Canadian robotic arm (aptly called Canadarm2) is currently attempting to fix itself with minimal human input, thanks to its very special passenger -- a multi-limbed helper robot called Dextre. Canadarm2 carries the handymanrobot around to fix anything that's broken on the ISS or to catch unmanned vehicles headed for the station, such as SpaceX's Dragon capsule. This time, though, Canada's Space Agency is remotely controlling Dextre to move and replace old cameras on Canadarm2 itself.

Apparently, this is the first time a task that typically requires an astronaut to spacewalk is being done robotically. CSA mission control supervisor Mathieu Caron says using robots to repair other robots on the ISS is ideal, since spacewalks are very complex and time-consuming. This method will give astronauts more time to perform scientific experiments and will reduce health risks at the same time. Dextre is slated to finish its task on Thursday, but it'll take some time before astronauts can hand over all repair jobs to the robot-fixing robot.

In this article: canadarm2, dextre, InternationalSpaceStation, iss, robot, Robots, space, TL18ROBO, tomorrow
All products recommended by Engadget are selected by our editorial team, independent of our parent company. Some of our stories include affiliate links. If you buy something through one of these links, we may earn an affiliate commission.