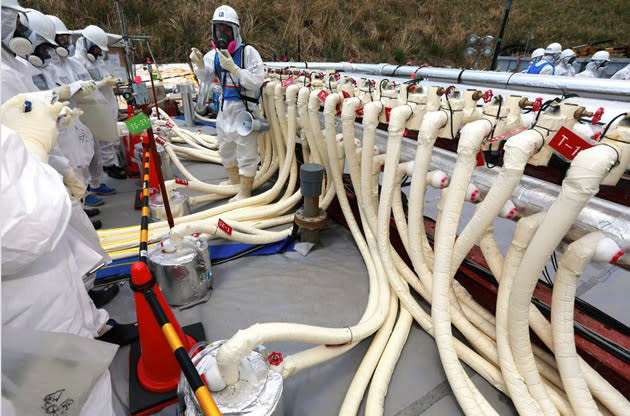 No one can blame Tokyo Electric Power Co. (TEPCO) for the earthquake and tsunami that wrecked its Fukushima nuclear plant in 2011. Since then, however, the company has been accused of having a "weak sense of crisis" in responding to the accident's many knock-on effects. This includes the leakage of contaminated groundwater that passes under the damaged plant and into the Pacific Ocean -- something that is happening right now at a rate of 400 tons per day. This week, after more than a year of back and forth, TEPCO has finally managed to get the Japanese nuclear regulator's approval to create a massive wall of frozen soil to hold the groundwater back.

At the government's expense, a refrigerant chemical will now be passed through an underground network of pipes, stretching for almost a mile underneath the plant, in the hope of cutting leakage down by around two thirds. A 10-meter test wall has already proven effective, but this is unlikely to be the end of the story: There's a risk the frozen soil could thaw during the wall's expected seven-year life span, or that it could cause areas of earth to sink. Meanwhile, nobody has so far been able to predict the long-term impact of the radiation that has already made its way into the sea, and much of the land around Fukushima is still home to nothing but ghost towns.

In this article: fukushima, ice, nuclear, radioactive, robots, services, tepco, TL17FUKU, wall
All products recommended by Engadget are selected by our editorial team, independent of our parent company. Some of our stories include affiliate links. If you buy something through one of these links, we may earn an affiliate commission.