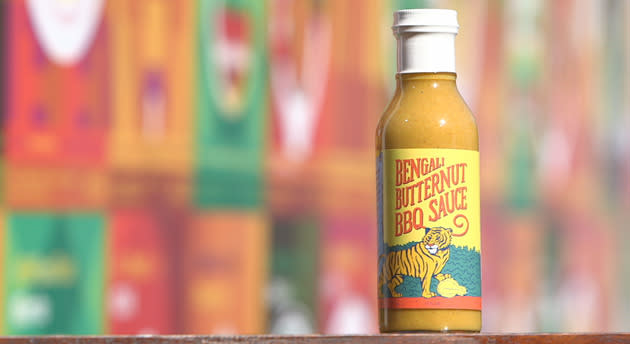 We know through first-hand experience that IBM's Watson supercomputer can make a fine meal, but it's apparently an ace at condiments, too. Fast Company has tried Bengali Butternut BBQ Sauce, a recipe chosen by Watson to maximize flavor through complimentary (and fairly uncommon) ingredients. The result is a "delicious" concoction unlike what you'd normally throw on your food -- butternut and white wine give it a sweet taste, while tamarind and Thai chiles add punch that lasts beyond your last bite.

The best part is that it's relatively guilt-free. Since Watson doesn't need to pad its recipe with fatty or sugary substances, the sauce is much healthier than many of its rivals. Sweet Baby Ray's honey mustard has more than twice the sugar and three times the calories, for example. IBM sadly isn't likely to mass-produce Bengali Butternut; besides it being well outside of the company's wheelhouse, it's expensive. Even so, it promises an era when you'll always have the perfect complement to your pulled pork or veggies.

In this article: barbecue, bbq, condiments, food, hotsauce, ibm, sauce, supercomputer, watson
All products recommended by Engadget are selected by our editorial team, independent of our parent company. Some of our stories include affiliate links. If you buy something through one of these links, we may earn an affiliate commission.