Re-authorizing your computer for Ringtones 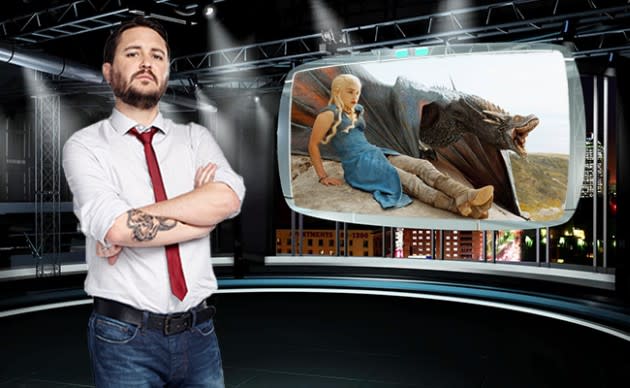 With Memorial Day come and gone and the temperatures rising, it's time to get ready for our summer TV schedule. The NBA and NHL are almost ready to enter the championship rounds of the playoffs, and most of the winter TV shows are out of the way. That means we have a few new entrants this week to take their place, including The Wil Wheaton Project, Crossbones and Undateable. HBO's Silicon Valley is also wrapping up with a season finale, but don't worry it will be back. For now, it will be replaced by AMC's new series Halt and Catch Fire, which focuses on a group trying to reverse engineer IBM's PC in the 80s. Also this week, NBC News will interview NSA leaker Edward Snowden. Movie and game fans have a lot of good options, lead by Watch Dogs, Mario Kart 8, and Wes Anderson's The Life Aquatic with Steve Zissou on Blu-ray from Criterion. Still, Game of Thrones watchers are probably focused entirely on Sunday night's episode, and with good reason, while soccer fans can tune in to all of the 30 for 30: Soccer Stories flicks on Netflix, and catch up on the US National team (suddenly without Landon Donovan) with ESPN's documentary series update on Thursday. Check after the break for a list of what's new this week plus a few trailers, and drop in the comments if you see any highlights that we've missed. After Grand Theft Auto V, the next big open world game is here, and it's Watch Dogs. Instead of focusing on crime and mayhem however, this one is more about technology and mayhem, with gameplay centered on hacking the environment around you to gain an advantage. Available on both current and yesteryear gaming systems (and PC), Joystiq has a full review if you need an extra push. Apparently this year's TV season is all about Pirates. After Michael Bay's Black Sails showed off its interesting take on Blackbeard for Starz, NBC has its own with the new show Crossbones. John Malkovitch will play the legendary swashbuckler, but we wonder if network TV can handle this environment. The Wii U needs to dive deep into Nintendo's back-catalog of content to compete with the new systems, and it's finally ready to with Mario Kart 8. The series' jump to HD also brings tracks that run in every direction (gravity is not an issue here) and enhanced online play. Shells and banana peels have returned, as well as the usual cast of characters, so blow the dust off of that system and charge up the GamePad before this one is released on Friday. Wil Wheaton has stuck around since his days on Star Trek, and tonight he launches his own show on Syfy. He'll be hosting a weekly roundup of things he likes from TV and the internet and he describes it as a sort of "Talk Soup for geeks". This approach has worked well for Aisha Tyler, Joel McHale and others over the years, and it will be interesting to see if The Wil Wheaton Project catches on in this niche.

In this article: crossbones, Halt and Catch Fire, hdpostcross, johnmalkovitch, listings, mariokart8, MustSeeHdtv, siliconvalley, SteveZissou, video, watchdogs, wilwheaton
All products recommended by Engadget are selected by our editorial team, independent of our parent company. Some of our stories include affiliate links. If you buy something through one of these links, we may earn an affiliate commission.