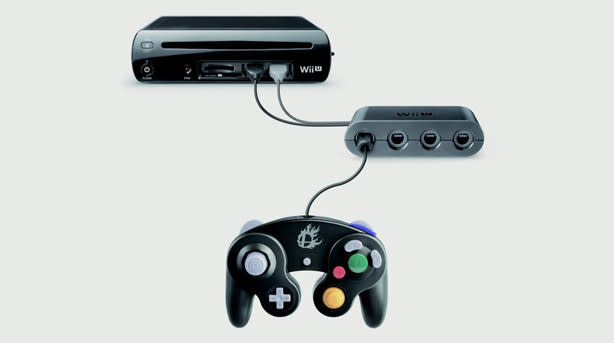 Not only is one of Nintendo's most loved games soon to arrive on the Wii U, but you'll also be able to play it using one of the game company's best controllers. An officially licensed adapter will let you plug in up to four GameCube controllers when playing the next-gen iteration of Super Smash Bros. As Joystiq points out, we don't know if there'll also be support for Nintendo's wireless Wavebird via the same piece of kit, or whether GameCube controllers will work with other Wii U titles. Neither do we have any pricing. What we do know is that the adapter will be shown off during a tournament at E3 on June 10th (check out the video below at 2:20). It''ll then presumably go on sale in time for the launch of Super Smash Bros. on the Wii U this winter -- and, from Nintendo's perspective, it surely can't come soon enough.

In this article: adapter, controller, gamecube, nintendo, Super Smash Bros, video, wavebird, wii u
All products recommended by Engadget are selected by our editorial team, independent of our parent company. Some of our stories include affiliate links. If you buy something through one of these links, we may earn an affiliate commission.