'Jurassic World Alive' is like 'Pokémon Go' with dinosaurs 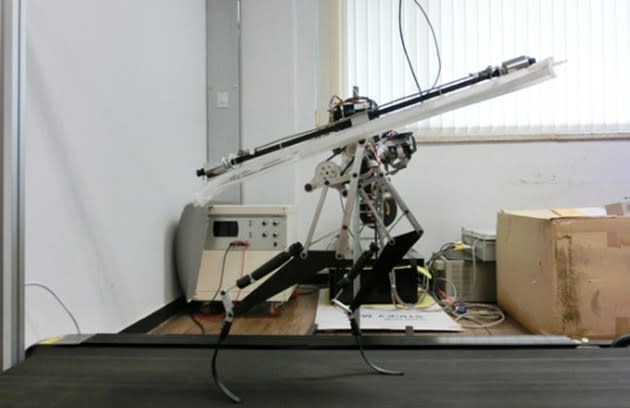 There's a new robot that's almost matched Cheetah's speed record, but it wasn't designed after another speedy cat. Instead, it takes cues from something more terrifying: a velociraptor. The two-legged machine named Raptor was created by scientists from the Korea Advanced Institute of Science and Technology, who've even outfitted it with a tail like the extinct reptile's for balance. In its current form, it can go as fast as 28.58 mph (46 km/h), just a bit slower than the famous mechanical cat's max speed of 29.2 mph (47 km/h). Compared to DARPA's robotic cat, though, Raptor's technology is a lot simpler, even using ordinary springs as tendons to be able to run fast more effectively. Right now, Raptor's confined to running on a treadmill like Cheetah's older iterations, but its creators hope to make it more stable so it can run on any surface without a tether. Once that happens, all it'll need is a velociraptor suit for the KAIST researchers to start their own (hopefully safer) Jurassic Park.

In this article: dinosaurs, kaist, KoreanInstituteOfAdvancedScienceAndTechnology, raptor, robotics, SouthKorea, velociraptor
All products recommended by Engadget are selected by our editorial team, independent of our parent company. Some of our stories include affiliate links. If you buy something through one of these links, we may earn an affiliate commission.