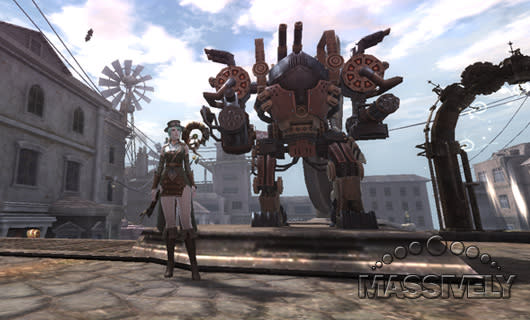 Do you prefer a steampunk or fantasy flavor in your MMO? With Black Gold Online you don't have to choose! And for those who vehemently dislike one or the other, you're welcome to express that distaste on the battlefield; Snail Games' upcoming free-to-play game features realm versus realm warfare that pits machine against magic. With these two different genres represented, the game looks to please a broader spectrum of players than the traditional single-genre titles that populate the MMOverse. The question is, will it succeed?

Even though we've perused available news and watched a variety of videos about everything from the various classes and different races to action combat to guild vs. guild systems, nothing beats getting into the MMO and experiencing it for yourself. Closed beta for Black Gold Online began mid-May, so I jumped in to get a taste of what awaits players when the game hits open beta this summer. What I found is that while the game excels in some areas, it comes up short in others. Here's a run-down of my first impressions. Variety, the spice of character creation

The game starts out of the gate well. While there are only two races to choose from per faction (one of each being human-esque), there is plenty of customization for the look of your character. You can select from a large assortment of presets and just leave it at that or you can adjustindividual features. Customization includes a mixture of set choices and sliders for everything from skin and hair hue to cheek bones to the infamous bust size. Players can even choose different pupils, like hearts and radioactive symbols! If making an individual and unique avatar is important to you, Black Gold has that covered. You can see a brief walkthrough of the customization in our first beta livestream.

There was one tarnish on the creation process for me. While Snail Games doesn't follow the road of extremely child-like Dwarven females as far as NCsoft does (I still feel queasy when I see them in Lineage II), they are still pretty young things -- and quite opposite of how I always pictured that race's womenfolk. It may seem inconsequential to some, but the fact that players are granted a mount via a quest at the beginning of the game is a huge plus to me. While I may be a big advocate of earning what you get, I do not like when games hold mounts back until the later levels. And these level-5 rewards aren't some hideous thing you'd be ashamed to be seen with; the roaring motorcycle in the steam-powered Isenhorst faction and the dino-antelope creature in the magical Erlandir faction were both pretty cool. Of course, these mounts aren't the personnel carriers that players can take into battle. Those have to be earned with a little more work.

At level 10 I found a quest that ended with me getting my first mech. Fun, right? Well, there was a damper on the experience. Once I hopped in my little death machine, I was given instructions on what commands would do what, such as changing views. However, those commands did not work! I got a bit frustrated only being able to walk forward and sidestep, but never turn my guns or my machine. As it turns out, you can't do any of that until you move on in the quest chain and go to a special battlefield. Once I got that figured out and walked through the portal, I had fun charging the enemies and blasting them. If you prefer the fantasy side of things, instead of mech guns your animal uses claw attacks and such.

Although the completion of this quest gives you only one type of personal carrier, there are numerous lines with different advantages that players can acquire. Every 10 levels another vehicle rank comes available. An example of one tree is seen below. Depending on your personal preference, this next point can be a positive or a negative. What am I referring to? The cutscenes! It felt like every few steps during the early portion of the game was punctuated by a new cinematic short. I can totally understand delving into story and sharing background this way, but the frequency got a little annoying to me even though I usually love in-game movies. I'm afraid I can't even say if these cinematics were well done or not; for the most part, they were stuttering too bad and I had to close them. Hopefully this will be fixed for open beta so I can actually learn about the world's history.

And now, the bad news

I started off with some of the positives of the game. Now I will move on to the negatives. I realize that some of these may not be negative to other players, but they are things that detracted from the game for me.

The very first thing I noticed when I fired up the game was that the UI was almost an exact replica of Age of Wushu's. Everything from icons to placement -- even tutorial instructions -- was so familiar. Many other systems and features were similar, too. You even get the timed login gifts. That familiarity might very well be a boon for some. However, in my case, it left the feeling that the devs didn't find it a priority to individualize this prominent feature for Black Gold. And if that was carried over, whether it be due to cost-saving measures or laziness, what else would be just a transplant from Snail's other previous MMO? I can understand sharing tech, but I'd have liked to see more effort put into making the UI distinctly Black Gold, not a steampunk-fantasy AoW mashup. Another thing that could be positive but missed the mark for me was how fast you actually leveled through the beginning of the game. Not only did you get a level seemingly every couple of quests, but the quests were insultingly minimal. Until level six, every quest involved at most walking a few feet and killing/collecting one thing. Usually, it was only one of the two! I may not be a fan of kill-10-rats 20 times over, but if you are going to send me to deal with a threat, telling me it's fine to leave a horde there while I only deal with one seems so wrong and feels unworthy of my time.

Finally, at level six I was tasked with killing two or three mobs! Can you believe I was actually excited by this? I thought I'd have reason to expand my reach and poke around the area. You know, explore a bit. I was foiled. The mob respawn rate was so insanely fast that the new one was replacing the one I killed before I could even loot the body!

I can understand that leveling should not be so much of a grind that it crushes players. However, the speed and lack of involvement here just left me feeling like I was being hurtled through a chute. Perhaps the game's aim is to funnel folks to the end and the RvR. But as a fan of the journey, I felt that the "getting there" (which is over half my fun) was pretty well stripped away.

Coupled with the last complaint is this: You don't even have to be present to play! Thanks to pathfinding (a feature I have come to loathe), all you need to do is click on your objective and the game automatically delivers you there. Need to talk to someone? Click. Or go get a mob? Click. How about gather something? Click. The pathfinding automatically mounts you when you start and opens the quest dialogue from the NPC when you arrive. You literally can just click to advance and then turn your attention to other things (like writing these impressions!). There was very little incentive to explore the world, and since that is my favorite part of games, I was disappointed. True, you don't have to use pathfinding, but how often will players resist the easy way? Both sides are not created equal! I know many players who are eager to experience a good steampunk game, and so that was actually the first faction I played. The problem is that it wasn't very much fun. Between pathfinding, ridiculously easy quests that required no effort, and no aggro mobs anywhere, it was pretty lackluster. The landscape was more gritty, which certainly fits the theme, but it just lacked a certain draw. Just because something is industrial doesn't mean it needs to be dull!

Contrast that to the fantasy side. From the first time I logged in, I noticed the world was more beautiful and alive. It wasn't just the colors and vibrancy of the landscape, either. Random events with mobs that aggro brought a much-needed element of risk to my gaming sessions. Quickly my love for my motorcycle mount drifted away. I wasn't alone in these feelings either; livestream viewers who preferred steampunk expressed that they changed their minds and will play fantasy because that side was just better. That's a very bad thing! If one side is definitely less fun than the other, then RvR will not play out well because one realm will be seriously undermanned.

Of course, development is still ongoing, and Black Gold Online still has an open beta phase to go through before launching. And since I was trying to give each faction equal time, I did not get to the end of the leveling curve for either side. Neither did I get to experience much PvP, which is a cornerstone of the game. Changes are sure to happen before the game launches, but only time will tell what those changes will be and how much they will affect the game.

Massively's not big on scored reviews -- what use are those to ever-changing MMOs? That's why we bring you first impressions, previews, hands-on experiences, and even follow-up impressions for nearly every game we stumble across. First impressions count for a lot, but games evolve, so why shouldn't our opinions?
In this article: beta, beta-impressions, beta-test, beta-testing, black-gold, black-gold-online, f2p, fantasy, featured, First-Impressions, free-to-play, freemium, hands-on, microtransaction, microtransactions, premium, snail, snail-games, steampunk, testing
All products recommended by Engadget are selected by our editorial team, independent of our parent company. Some of our stories include affiliate links. If you buy something through one of these links, we may earn an affiliate commission.