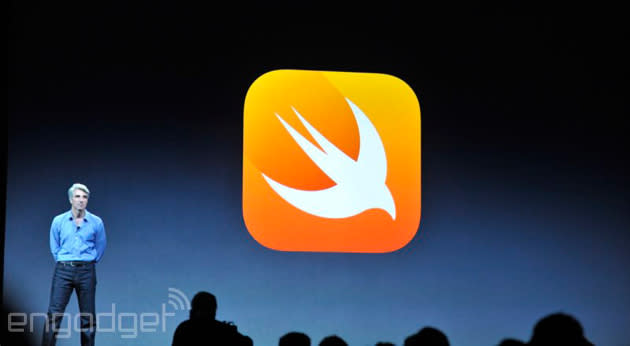 Apple's used Objective-C as its programming language of choice for right around 20 years now, but it's brought something new to its yearly developer conference: Swift, a new tongue of its own making. Apple describes its new lingua franca as "Objective-C without the C," but it keeps (and improves on) the speed of its progenitors. Even if you don't know what those terms mean, it's easy to pick up that apps iOS and OS X developers build with Swift should run even smoother and faster than counterparts made with the Objective-C language they've been using. According to the folks from Cupertino, Swift can be used to craft anything from social networking apps to 3D games.

The proverbial baby isn't going out with the bath water, however, as Swift code can run alongside Objective-C and C in the same application. Swift may also make life easier for developers in a number of ways, one of which is a "playground" feature that provides a preview of what's being programmed. For example, Cook and co. demoed how a developer could visualize a flight path of an in-game blimp (in real time, no less) just by tweaking a few lines of code.

If you're raring to get into the nitty-gritty of the language, you can read up on its finer points thanks to a free e-book Apple's just released. Developers itching to get their hands dirty with Swift can download the XCode 6 Beta and get coding. However, submitting an app written with Swift to the App Store will have to wait until iOS 8 and OS X Yosemite arrive this fall.

In this article: apple, iOS, mobilepostcross, OSX, WWDC2014
All products recommended by Engadget are selected by our editorial team, independent of our parent company. Some of our stories include affiliate links. If you buy something through one of these links, we may earn an affiliate commission.