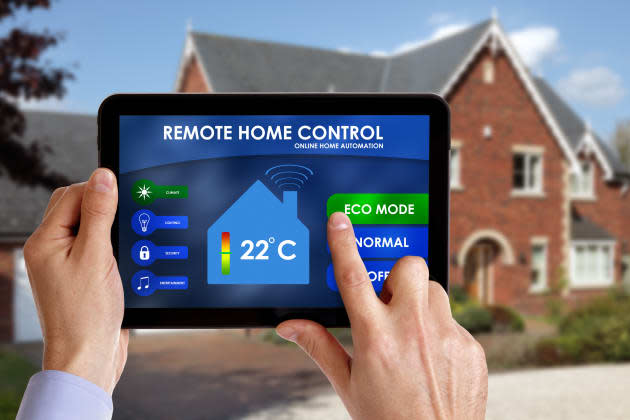 It was only one announcement among many at WWDC 2014's opening keynote, and Craig Federighi, Apple's SVP of software engineering, made mention of Apple's new foray into home automation practically in passing. HomeKit is a common network protocol that seeks to make Siri your preferred method of controlling all of the smart things in your home. We're talking garage door openers, lighting, thermostats, door locks, the works. Federighi spent just one and a half minutes of a two-hour keynote talking about HomeKit -- scant attention paid to such a massive undertaking.

However, its mere mention at Apple's hallmark developer event means that HomeKit's no passing fancy. Still, the home automation/internet of things market is a tough nut to crack. There are countless companies building countless devices that use myriad wireless protocols, and few, if any, of those devices can talk to each other. It remains to be seen whether HomeKit is just another doomed attempt to unify this fragmented industry.

Can Apple succeed where Google has (thus far) failed?

You may recall a similar effort from Apple's biggest rival. Google's Android @ Home was first announced over three years ago. It too promised to give you control over the various smart things in your abode -- though that system required a hardware hub to work with Google's custom wireless-networking protocol. After its initial announcement, hopes ran high that it would fulfill its promise, but we haven't heard much from Android @ Home since.

Can Apple succeed where Google has (thus far) failed?

Apple's uniquely positioned to drive adoption of HomeKit due to sheer market power -- iOS devices are the only Apple hardware needed for HomeKit to work, and the iPhone and iPad are two of the most popular mobile gadgets on the planet. Once iOS 8 is released, Apple will, in short order, have hundreds of millions of HomeKit-compatible devices in customer hands. That massive, built-in user base could make HomeKit an attractive option for home automation hardware makers. However, iOS only accounts for a portion of the world's mobile market, and because HomeKit isn't on Android, its reach doesn't extend to the bulk of smartphone users. Plus, hardware makers already have their own apps for controlling their devices, and it's unclear whether they're willing to cede software control to Siri.

Apple's already "working with" 18 companies on HomeKit, including some well-known names in the home automation industry (Philips, Chamberlain, Honeywell) and a pair of chipmakers (Marvell and Broadcom) that should ensure there's compatible silicon to be had for other OEMs who want to hop on the HomeKit bandwagon. Problem is, no compatible door lock or thermostat yet exists (at least none that Apple's willing to show us), so skepticism about HomeKit's viability rightfully remains.

Conspicuously absent from Apple's list of HomeKit partners is Nest. That's due, no doubt, to Apple's general distaste for all things Google, but it could come back to haunt Cupertino. Nest is the biggest name in home automation right now, and it seems inevitable that the company will expand beyond thermostats and smoke detectors. As Nest's footprint grows, so will the number of consumers finding fault with HomeKit's lack of support for its hardware.

As Nest's footprint grows, so will the number of consumers finding fault with HomeKit's lack of support for its hardware

Most existing OEMs have already made their wireless choice: be it Z-Wave, ZigBee or some other protocol. If existing home automation hardware cannot be made to work with Apple's new networking tech, then it'll have to wait for such hardware to make its way to retail. Of course, Apple's got several months before iOS 8 is disseminated to the public, so that might be all the time OEMs need.

It's hard to see how HomeKit, given what we know about it, can be the great unifying force of the home automation industry. Still, it seems to be a step in the right direction. Here's hoping Apple can, in Federighi's words, "bring some rationality to this space."

In this article: apple, google, home, home automation, homekit, wwdc, wwdc2014
All products recommended by Engadget are selected by our editorial team, independent of our parent company. Some of our stories include affiliate links. If you buy something through one of these links, we may earn an affiliate commission.