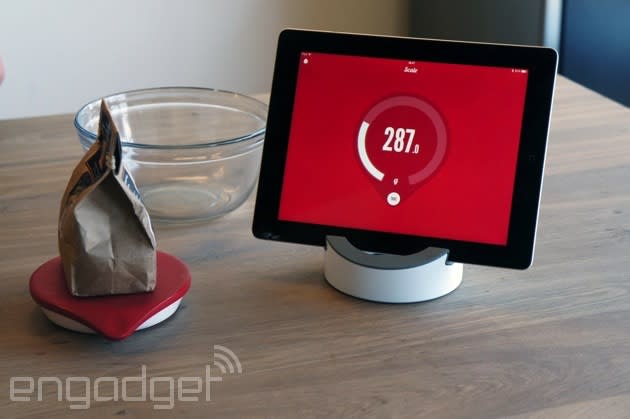 Hey, not all of us are Marissa Mayer -- most of us don't have the time to make a spreadsheet outlining the optimal ratio of cupcake ingredients. If you never know which recipe to trust -- or you're simply afraid of screwing things up -- a startup called Drop hopes to take the pain out of baking. The company just launched pre-orders for its connected kitchen scale, which not only weighs ingredients, but works with an iPad app to serve up curated recipes, complete with photos of what the food should like after you complete the different steps. As you're looking through recipes, you'll notice difficulty ratings, along with a time estimate and a warning should the instructions call for something potentially dangerous like nuts (by the way, there aren't just baked goods here, but also pastas, pizza dough and other savory items). When you're weighing ingredients, the scale will of course tell you if you have enough of a given item. If you don't, though, there's a "substitute" feature that helps you make do without (210g of buttermilk, for example, is equivalent to 15g of lemon juice and 87g of milk). Once you've made your way through the whole list of steps, there's even a timer built into the app so that you don't end up having to wing it.

Throughout, the app automatically moves to the next step once it detects you've added the right amount of a given ingredient. The beauty there is that you don't have to touch the screen. And in the event that the app doesn't advance through the recipe on its own, there's a button on the scale you can press instead of having to touch your iPad with sticky fingers. Speaking of the scale, it has a fairly small footprint, as our hands-on photos can attest, and it's coated in a non-stick finish.

Pre-orders begin today, though it won't actually be available until the fall. Even so, you might want to get in on this now if you're interested -- the price is currently $80, but it'll rise to $99 once the thing actually starts shipping.

In this article: drop, kitchenscale, scale
All products recommended by Engadget are selected by our editorial team, independent of our parent company. Some of our stories include affiliate links. If you buy something through one of these links, we may earn an affiliate commission.