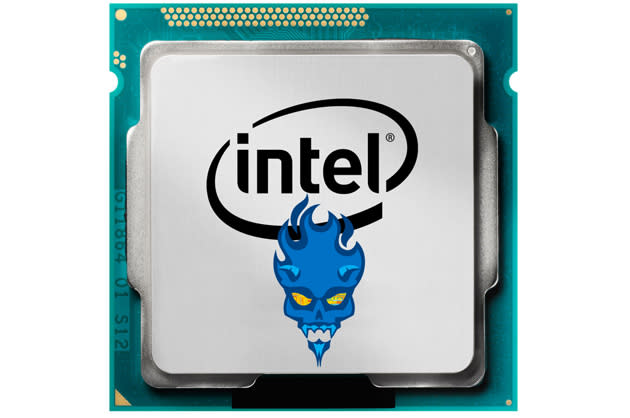 Sure, we've seen 4GHz base clock speeds before, but never in an Intel chip. Such a part is just weeks away, however, in the form of the refreshed Haswell Core i7-4790K, codenamed "Devil's Canyon." The new chip shifts from 4GHz up to 4.4GHz in turbo mode, with the only downside being a slight increase in wattage from 84W to 88W -- a change that might be partly mitigated by Intel's use of a better thermal interface material underneath the lid of the CPU. The $339 price tag is identical to what you'd pay for the existing Core i7-4770K on Newegg (base clock: 3.5GHz), so it's definitely worth holding onto your cash until the end of the month. There's also a Core i5-4690K to look out for, priced at $242, which notches base and turbo speeds up by 100MHz compared to the current product -- not a huge gain, but enough to send a message that Intel isn't entirely preoccupied with Broadwell and ultra-portables. Meanwhile, here's some useful coverage of the latest overclock-friendly Z97 motherboards, just in case you're looking to accessorize.

In this article: core i5-4690k, core i7-4790K, devils canyon, haswell, intel
All products recommended by Engadget are selected by our editorial team, independent of our parent company. Some of our stories include affiliate links. If you buy something through one of these links, we may earn an affiliate commission.