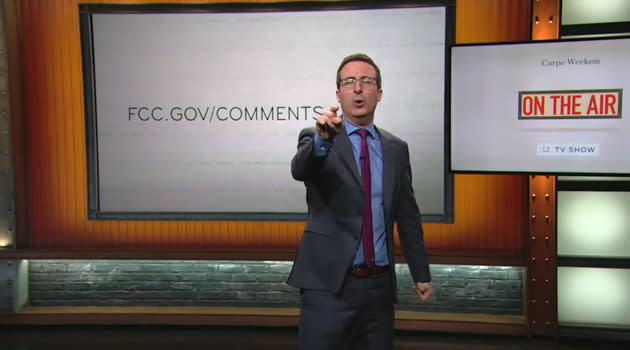 Apparently Last Week Tonight host John Oliver's call to arms was answered, as the United States government's website for Federal Communications Commission complaints is experiencing some issues. Specifically, the page where you can submit comments regarding proposed internet provider regulation is having issues. The FCC's Twitter account says the issues are due to, "heavy traffic." And why might that page be experiencing especially high traffic volume? It could be that, after reading our net neutrality explainer, the entire internet decided to rise up and push back on the handful of major corporations which control the pipes we all use.

But, more likely, it's a reaction to comedian-turned-host John Oliver's hilarious and smart piece this past weekend on the subject. See it yourself after the break -- and then tell the FCC what you think about keeping the internet open...if you can get to the site, that is. Keep trying!

In this article: fcc, hbo, johnoliver, lastweektonight, netneutrality, video
All products recommended by Engadget are selected by our editorial team, independent of our parent company. Some of our stories include affiliate links. If you buy something through one of these links, we may earn an affiliate commission.