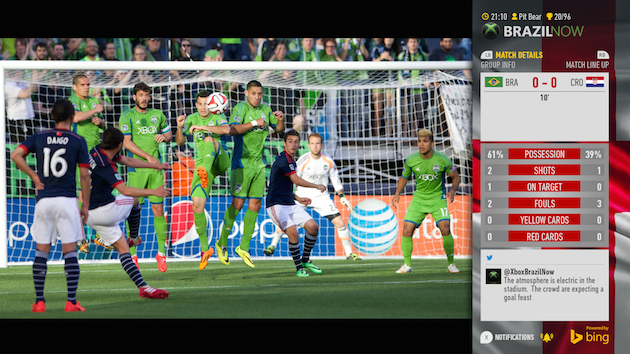 The World Cup 2014 is one of the hottest topics there is at the moment. Whether you're looking for in-depth coverage or streaming live games, it looks as if everyone has something special planned for the tournament. And, not surprisingly, this includes Microsoft. To go along with the recent announcement of ESPN FC World Cup Essentials, the Redmond-based company has now revealed Destination Brazil, a hub for the Xbox that's set to feature nothing but World Cup content. There will be, among other things, an app dubbed Brazil Now and an original series titled Every Street United.

Brazil Now can utilize the Xbox One's TV features to display useful info while you're watching matches; it's also able to notify you when a game is about to start and share score updates, right on your screen, similar to the existing NFL app. Every Street United, on the other hand, is a show which follows football legends Thierry Henry and Edgar Davids as they go around the globe trying to find new talents.

When it launches on June 12th, just in time for the start of the World Cup, Destination Brazil is going to be available on both the Xbox One and Xbox 360. That said, some features, like Brazil Now, will only be compatible with Microsoft's newest console. For now, you can watch the trailer for Every Street United below and, perhaps, get more pumped ahead of the football craze that's about to take place down in South America.

In this article: Brazil Now, Destination Brazil, Football, hdpostcross, Microsoft, Soccer, Sports, World Cup, World Cup 2014, WorldCup, Xbox One, XboxOne
All products recommended by Engadget are selected by our editorial team, independent of our parent company. Some of our stories include affiliate links. If you buy something through one of these links, we may earn an affiliate commission.