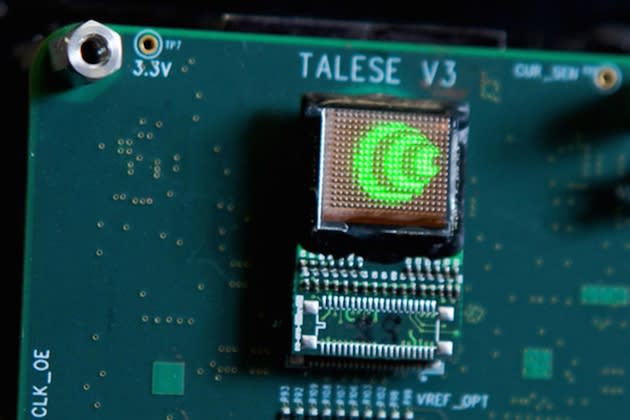 Just imagine: a smartphone that projects 3D holograms into thin-air. If you can wait until the end of next year, and if you can believe the claims being made by a well-funded company called Ostendo, then your next handset could be capable of just that. Thanks to breakthroughs by the Californian display startup, 5,000ppi projectors the size of Tic Tacs are now powerful enough to control the color, brightness and angle of individual beams of light across one million pixels. Just one chip is said to deliver a usable image, but adding additional chips provides scope for even more complex and detailed images. The Wall Street Journal was treated to a demo involving six chips which beamed green dice spinning in the air and noted how "consistent" the motion appeared, irrespective of where it was viewed from.

Development of the technology is still in the early stages, meaning the first chip will be limited to only 2D video when it begins shipping in summer 2015, capable of being projected onto nearby surfaces at sizes of up to 48 inches. However, Ostendo founder Hussein S. El-Ghoroury says that its second chip, which is capable of creating 3D images that float in the air and appear almost like a solid object, will enter manufacturing just months after the first. If you've dreamed of seeing your friends projected in Star Wars-like holographics while you chat, Ostendo hopes it can make such a thing a reality. It's already got some major handset manufacturers on board, but the next step will see the company make the pixels smaller to boost the resolution of its holograms. After that, it'll try and embed its chips in anything with a 3D display, including TVs, smartwatches and even holographic tables.

In this article: 3d, chip, gadgetry, gadgets, gear, hologram, mobilepostcross, ostendo, projection, smartphone, timeline16holodisplay
All products recommended by Engadget are selected by our editorial team, independent of our parent company. Some of our stories include affiliate links. If you buy something through one of these links, we may earn an affiliate commission.