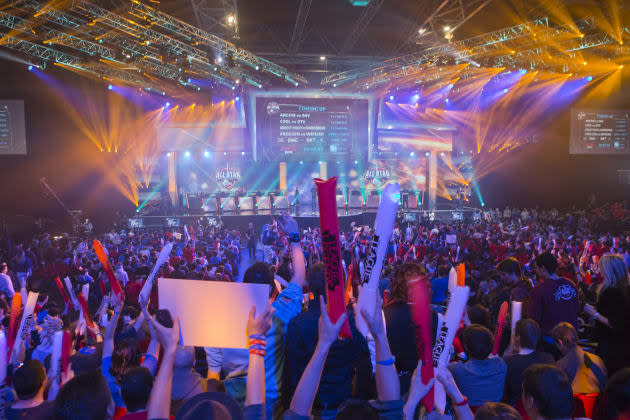 We've known that streaming game video from the likes of Twitch has been popular, but the extent of it hasn't exactly been clear. Last year 2.4 billion hours were spent watching competitive gaming (eSports) broadcasts online, according to a report from market research firm IHS. Think about this for a second: if there are around 8,766 hours in a year, in 2013 people watched some 273,785 years of League of Legends (LoL), Dota 2 and StarCraft 2 competitions. For context, the 528,000 who streamed this year's Super Bowl only tuned in for around 48 minutes each, or 422,400 hours total. IHS says that this eSports feat wouldn't have been possible without services like Twitch which are capable of handling huge amounts of viewers for live audiences -- like last fall's LoL tournament that drew 32 million viewers, with 8.5 million watching at the same time. The next step? Turning all of those eyeballs into profit, of course. By 2018, IHS forecasts that eSports advertising revenue will be worth $300 million. Cha-ching.

In this article: dota2, esports, gaming, hd, hdpostcross, LeagueOfLegends, PcGaming, starcraft-2, twitch
All products recommended by Engadget are selected by our editorial team, independent of our parent company. Some of our stories include affiliate links. If you buy something through one of these links, we may earn an affiliate commission.