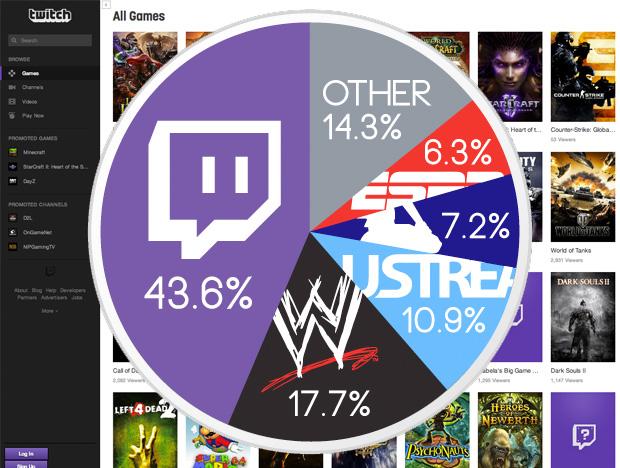 Video games now have more online spectators than traditional sports. Crazy, right? It's crazy. According to Qwilt, a company that provides video caching services to content creators, Twitch is now the most popular live streaming site in the US. The outfit's analytics group says the streaming site is more popular than UStream, the WWE, ESPN and MLB.com combined, owning a massive 43-percent share of all live streaming traffic. It's slightly shocking from a cultural standpoint, but we can't say we're entirely surprised: with the Xbox One, PlayStation 4 and even mobile platforms offering average gamers the chance to put on a show, Twitch is hosting more than a million streams per month. There's simply more content: Twitch streams gameplay 24 hours a day. ESPN has to wait for a sporting even to actually happen.

Twitch's standing in Qwilt's general video entertainment poll is a little less impressive, taking only 1.5% of the video streaming market when pitted against Netflix and Google's on-demand services. Even that has a silver lining, however, as Twitch still ranks in the top 5 video entertainment services for six countries: Brazil, Peru, Taiwan, Thailand, the United Kingdom and the US. Turns out gamers like to watch other gamers game. Who would've thought? Hit up the source link below to see Qwilt's live video streaming infographic, accompanied by a thinly veiled pitch for its video caching service.

In this article: livevideo, qwilt, streaming, twitch, video, videogames, videostreaming
All products recommended by Engadget are selected by our editorial team, independent of our parent company. Some of our stories include affiliate links. If you buy something through one of these links, we may earn an affiliate commission.