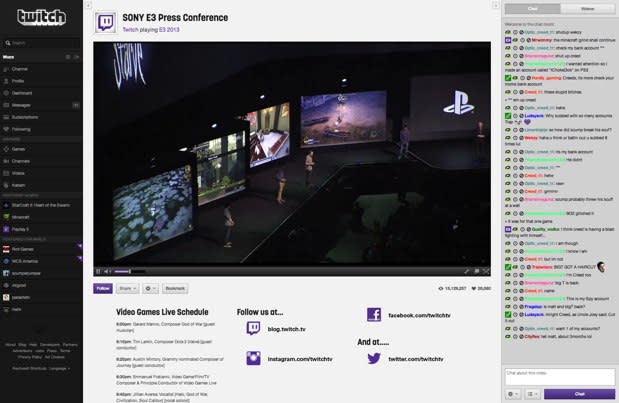 I share, you share, we all share video game video -- or, at least, that's the promise of the rapidly encroaching next generation of consoles. With Twitch now officially joining Sony's PS4 as an additional livestreaming partner, gamers will have one more option (the other being Ustream) to broadcast gameplay when they press that Share button. The announcement, made at this year's Gamescom in Cologne, Germany, positions Twitch advantageously on both Sony and Microsoft's warring black boxes as an inbuilt app, although the similarities may end there. As Matthew DiPietro, Twitch's VP of Marketing, explained to us, "The product itself and the feature set that will actually be available on both of the consoles is still a little bit up in the air because they're actively being produced right now... but the key sort of feature set is clear." So crucial elements like video broadcast and viewing, picture-in-picture and audio capture -- all basic functions currently enjoyed by the service's 600,000-strong user base -- will be de facto at launch.

But does that mean Day One or when the app launches? "Most likely for PS4 that's Day One and we're working on that for Xbox One," DiPietro said, so there's no guarantee. But he was able to elaborate a little more on how search will work when the service goes live, adding that "[Discovery] will be a very similar experience to the Twitch website and Twitch mobile applications. You can browse by game, by channel [and] we're exploring ways to explore by genre." You'd think, then, that the ability to filter video via your friends list would also make the cut, but that sorting feature's not something users can expect initially. Rather, it's something DiPietro said could come at a later date.

It's clear that Twitch's UI across both PS4 and Xbox One is still a work in progress, or "squishy" as DiPietro obliquely put it. But what's not clear is how users will select and launch the app, or if they'll even be able to set Twitch sharing as default -- he couldn't say more. And while Twitch is essentially free to use, it remains to be seen whether or not console access to its video sharing service will be put behind a pay wall à la PS Plus or Xbox Gold. "That's entirely up to Sony," he said, and by Sony's own very public E3 promise, a remote possibility. Although, as Microsoft's recently proven again and again, you can never say never. SAN FRANCISCO- August 20, 2013 - Twitch, the world's leading video platform and community for gamers, today announced it will be coming to the PlayStation®4 (PS4™) system, Sony Computer Entertainment's (SCE) next generation computer entertainment system. By simply hitting the "Share" button on the DUALSHOCK®4 wireless controller, PS4 system users worldwide will be able to broadcast their gameplay directly to their Twitch channels. In addition, users will be able to view content streamed to the Twitch community from other PS4 gamers. PS4 users will be able to fully utilize Twitch's broadcast and viewing features for free.

"PlayStation has a long history of delivering some of the best gaming experiences in the industry and we're excited to have Twitch available on a console as heavily anticipated as PS4," said Emmett Shear, Twitch CEO. "Through this partnership we are paving the way for every PS4 gamer to become both a broadcaster and an avid spectator of amazing content."

Since launching in June 2011, Twitch has focused its efforts on being everywhere gamers are, as well as being a platform for the vast and varied video game ecosystem. As a result, the platform's broadcasting community spans developers, media outlets, organizations, publishers and individual gamers with more than 600,000 broadcasters catering to more than 38 million unique viewers per month.

In this article: gamescom2013, gdce2013, hdpostcross, livestreaming, playstation 4, playstation 4 twitch, PlayStation4, playstation4twitch, PS4, sony, Twitch
All products recommended by Engadget are selected by our editorial team, independent of our parent company. Some of our stories include affiliate links. If you buy something through one of these links, we may earn an affiliate commission.