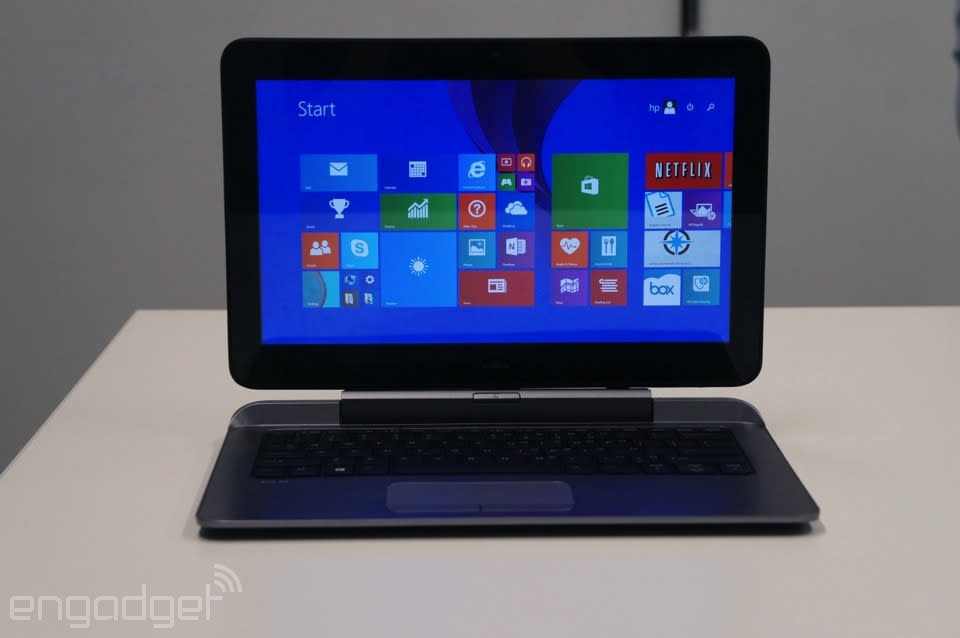 If you read our Surface Pro 3 review, you know we recommend it, but only for a certain kind of person: someone who needs both a laptop and a tablet, preferably one that allows for pen input. Even then, is Microsoft's approach the smartest one? Can you really call something a laptop replacement if it's not as comfortable to use in the lap, or if the keyboard isn't as sturdy? For all of you skeptics out there, there's an alternative incoming: HP has just announced the Pro x2 612, a laptop-tablet hybrid that offers many of the same features as the Surface Pro 3. Like the Surface, this is a 12-inch tablet that supports pen input and runs on Ultrabook-caliber Intel Core processors. The main difference is that rather than use a flat, click-in keyboard, the Pro x2 612 comes with a backlit, spill-resistant keyboard dock. As a bonus, that dock also includes a spare battery that brings the total runtime to about 14 hours. As for the tablet itself, it uses a Wacom pen digitizer, which is what the Surface Pro had before Microsoft switched to N-trig. As a quick refresher, Wacom's chief benefit has always been its precision, with 1,024 levels of pressure sensitivity. The downside, though, is that Wacom tablets tend to be thicker than N-trig ones, which is the primary reason Microsoft made the switch. Indeed, that seems to be the biggest drawback here: The tablet and keyboard dock combined weigh around four pounds, compared with two or so for the Surface Pro 3. In exchange, you get a bunch of ports on the dock, including VGA, DisplayPort and Ethernet sockets; an SD slot; and two USB 3.0 ports. The tablet, meanwhile, has a microSD slot, along with a slot to stow the pen -- something you won't find on the Surface. In effect, then, the Pro x2 612 is a laptop first and a tablet sometimes, whereas the Surface Pro 3 tries to be both in equal measure. Again, different approach here.

Given that HP plans on selling this to businesses and government agencies, you can bet it has all sorts of security measures in places. These include TPM and a Smart Card reader, as well as an optional fingerprint scanner. Spec-wise, it'll start with a Celeron processor, with options for Pentium, Core i3 and Core i5 (the Surface Pro 3 goes up to i7). Storage capacity ranges from 64GB to 512GB; screen resolution starts at 1,366 x 768, but goes up to full HD. A built-in 4G radio will be an option too, as will Windows 7. HP says it will ship in September, with the power keyboard included. You can also buy the standalone tablet, in which case it's just called the Pro Tablet 612 (no "x2"). Oh, and if you're put off by the weight, there'll be a lighter-weight "travel" keyboard too. Until then, check out our hands-on photos above -- and take our word for it when we say the keyboard is pretty good.

In this article: computex2014, hp, hpprox2612, prox2612, video
All products recommended by Engadget are selected by our editorial team, independent of our parent company. Some of our stories include affiliate links. If you buy something through one of these links, we may earn an affiliate commission.