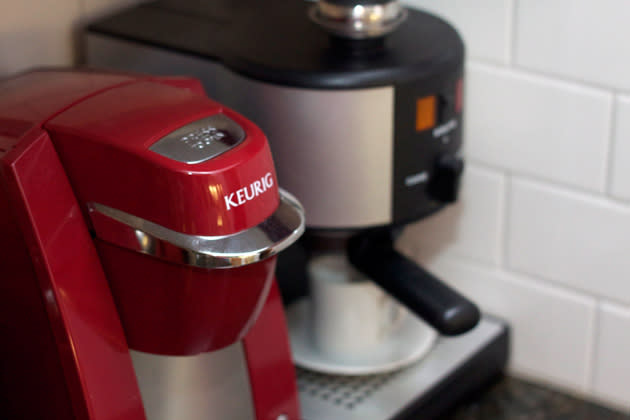 Much like printer makers barring cheap ink, Keurig is using elaborate methods to block third-party coffee pods; its upcoming Keurig 2.0 machine will have cameras that read tags and limit you to official brews. Think of it as K-cup copy protection. Unfortunately for the company, those added measures may be for naught. TreeHouse Foods, which sued Keurig for allegedly abusing a monopoly with its 2.0 system, now estimates that it should take just a "matter of months" to replicate the K-cup technology. The discovery should keep TreeHouse selling unofficial pods that cost significantly less than Keurig's, and it could also thwart similar protection schemes in other companies' coffee makers.

Keurig hasn't yet offered comment on the potential workaround, but it isn't likely to take any challenges lying down. Like Nestle and its Nespresso system, Keurig is protecting a razors-and-blades sales model where it sells the base product (the brewer) for little to no profit and depends on pricey add-ons (K-cups) to make up the difference. However, the word of a circumvention technique suggests that there might not be much it can do to stop cheaper alternatives from reaching the market, at least in the short term. It also echoes what we've seen in attempts to combat digital piracy -- ultimately, there's no completely foolproof way to prevent copying.

In this article: beverage, brewer, brewers, coffee, coffeemaker, copyprotection, drink, drm, household, k-cup, keurig
All products recommended by Engadget are selected by our editorial team, independent of our parent company. Some of our stories include affiliate links. If you buy something through one of these links, we may earn an affiliate commission.