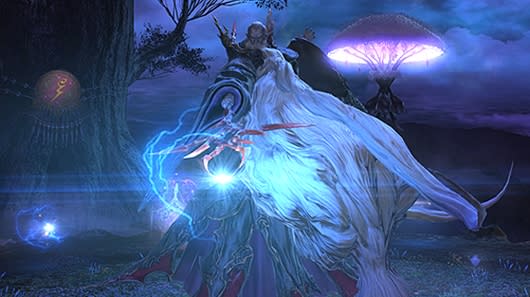 Final Fantasy XIV is going to have a big week at E3 next week. That's not speculation; Naoki Yoshida is running two live letters from the show floor, and players have been promised big announcements. But a big patch has just dropped for the game, and patch 2.28 brings plenty for players to enjoy all by itself. The promise of more in the near future is just icing on the cake.

Owners of Animus weapons can now continue advancing their weapons to Novus incarnations, with larger Mythology tomestone rewards making the road to Animus a bit less onerous. The patch also includes the new sightseeing log, challenging players to find the scenic vistas across Eorzea. It also improves the existing posing system, with new poses for each race and a memory of what pose you were in when you move. You can read through the full patch notes to get an idea of everything contained therein, and take a gander at the Ramuh preview for an idea of what's coming next in patch 2.3.
In this article: console, consoles, emotes, fantasy, ff, ff14, ffxiv, ffxiv-patch-2.28, final-fantasy, final-fantasy-14, final-fantasy-xiv, improvements, news, news-items, patch, patches, quests, sightseeing, square, square-enix, update, updates, upgrade-quests, upgrades, vista, vistas
All products recommended by Engadget are selected by our editorial team, independent of our parent company. Some of our stories include affiliate links. If you buy something through one of these links, we may earn an affiliate commission.