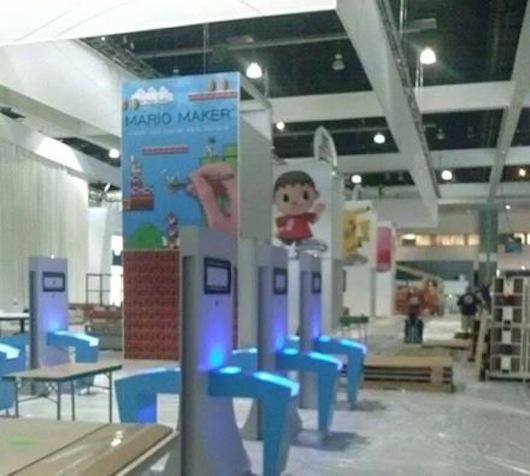 Mario Maker may be one of Nintendo's E3 reveals, at least if the above image is genuine. The photo, posted by Nintendo Enthusiast, is alleged to be of Nintendo's show floor at next week's conference in LA. The grainy image makes it hard to tell, but both it and the name suggest a kind of content creation game based around making your own 2D Mario levels.

Nintendo Enthusiast doesn't note how it obtained the photo, so be sure to apply the grain-of-salt rule to what you're seeing; this is very firmly an unconfirmed rumor. Either way, we'll find out what Nintendo has up its sleeve in a few days' time, both at the show and during the company's live stream event.

Update: Hat tip to eagle-eyed commenter arockefellow, who notes what looks like - it's hard to say for sure - grey bases beneath The Villager, Pikachu and Kirby. Of course that could just be innocuous, or maybe we're looking at NFC integration with Super Smash Bros. Again, the image is unverified, so keep those salt grains near.
[Image: Nintendo Enthusiast]
In this article: 3ds, e3-2014, mario-maker, nintendo, wii-u
All products recommended by Engadget are selected by our editorial team, independent of our parent company. Some of our stories include affiliate links. If you buy something through one of these links, we may earn an affiliate commission.