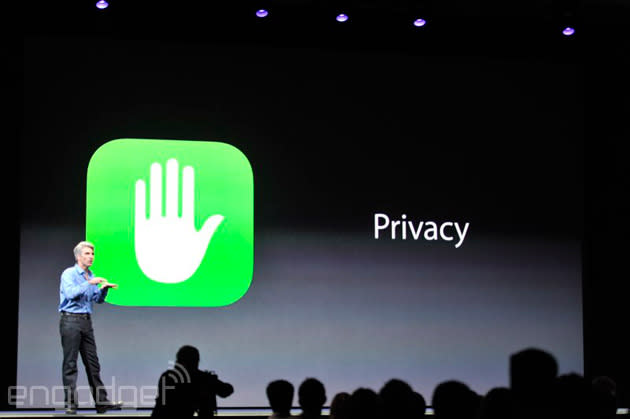 Apple made a hullabaloo over iOS 8's user-accessible privacy controls during its WWDC keynote, but it now appears that some of the biggest safeguards are under the hood. Security guru Frederic Jacobs has noticed that iOS 8 uses random network identifiers when scanning for WiFi access, and will only reveal a device's true ID when it connects. In other words, hotspot operators can't get your position simply because you're walking by with an iPhone in hand -- you have to sign in first.

It's a relatively simple move, but it could have far-reaching effects on data collection. Both cities and retailers have experimented with tracking phones as they pass by WiFi hotspots, helping to gauge foot traffic. When iOS 8 launches, it could render those trackers useless; at best, they'd paint an incomplete picture. There's no word on whether or not other platforms will follow suit. Even if no one else adopts the idea, though, it's good news for privacy advocates who want to limit access to their location.

In this article: apple, ios8, location, marketing, mobilepostcross, privacy, wi-fi, wifi
All products recommended by Engadget are selected by our editorial team, independent of our parent company. Some of our stories include affiliate links. If you buy something through one of these links, we may earn an affiliate commission.