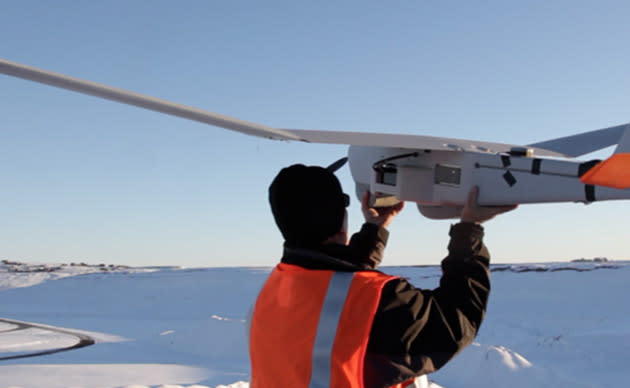 A hand-launched UAV called Puma just made history -- it's now known as the first drone to get the Federal Aviation Administration's seal of approval to do commercial flights over land. Puma, which was originally designed for military use by California company AeroVironment, has been doing surveillance work at the Prudhoe Bay oil field in Alaska since June 8th. In particular, it's using its onboard sensors to make 3D models of BP Exploration Inc.'s pipelines, roads and equipment for industrial applications. This isn't the first time Puma got the FAA's permission to fly commercially, though -- last year, the four-and-a-half-foot long drone with a nine-foot wingspan monitored drilling platforms and migrating whales over the Arctic Ocean.

Despite granting these companies permission to do commercial flights over land, the FAA's still far from coming up with the final set of rules and regulations for drone flights in US skies. Thus far, the agency has started doing test flights over North Dakota lands in April, but it still has to do the same in five more test sites across the country. Don't be surprised if more FAA-approved drones pop up in the near future, though -- the agency plans to allow films, farms and other low-risk industries to fly UAVs legally as soon as November.

In this article: AeroVironment, drone, drones, puma, UAV
All products recommended by Engadget are selected by our editorial team, independent of our parent company. Some of our stories include affiliate links. If you buy something through one of these links, we may earn an affiliate commission.