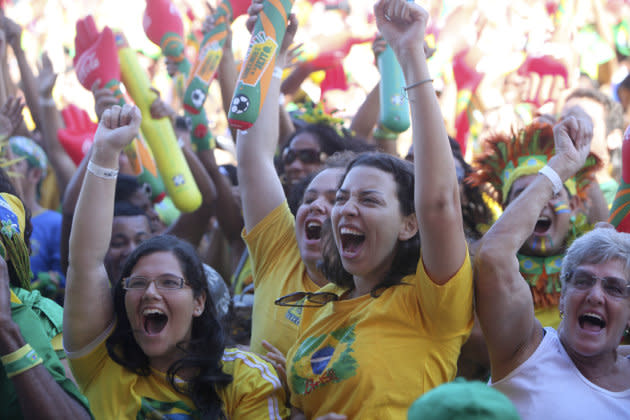 Like a trio of vuvuzelas, the three big internet platforms became a significant part of the World Cup's background noise in 2010. They have even more to offer this time around: Not just a multitude of ways to follow scores and other stats, but also places to go if you want to trumpet your opinions and listen to those of others. So, we've rounded up some of the best advice from Twitter, Facebook and Google on how to get the most out of the new features they're dishing out for Brazil 2014.

If you're already au fait with the Twittersphere's workings, you'll want to begin your journey at the #WorldCup2014 hashtag page. This main timeline will show you relevant tweets from celebs, teams, pundits and people in your network. On the right-hand side you'll see quick access to a Teams page, so you can easily find and follow your home nation. There's also a handy bar down the left that shows the latest scores and upcoming games.

Oh, and remember the three-letter hashtag for your team! Just like in 2010, using this hashtag inside a tweet will magically cause the appearance of your national flag ("hashflag") to bring some color to your tweet. For example, it's #URU for all of you Uruguayans. If you're not already on Twitter, then you'll want to start by signing up and saying "yes" at the bit where you're offered some extra World Cup excitement. This will take you through a couple of easy steps to choose your favorite team and set your wallpaper accordingly. If you're a true patriot, you'll keep that wallpaper forever. Forever, dammit. This all starts at the Trending World Cup page, which works in a similar manner to Twitter's hub -- albeit with a bit less detail. You can view upcoming matches, but there's no obvious shortcut to find your official team page -- you just have to search for it (e.g., "U.S. Soccer") and look for the blue tick to highlight the official site. There is, however, a "Fan Map" that shows the locations of millions of footy fans around the world and what, exactly, they're fans of. It's a gimmick, perhaps, but it has already proven itself useful in showing that England's Wayne Rooney is widely detested across mainland Europe. Compared to the other two, there's a distinct lack of structure and effort from Google at the #WorldCup2014 page. In fact, there isn't even one official hashtag -- people are just using whatever tag comes to mind, resulting in something of a mess.

Then again, Google has other assets at its disposal that World Cup fans might find useful. Firstly, there's a straightforward search, which will show up-to-the-minute scores and stats when you search for relevant terms like "world cup" or "world cup uruguay." There's also Google Trends, which shows all manner of strange observations about upcoming matches, based on what people are searching for.

If you load up Google Now on your phone or browser, you should automatically be asked if you're interested in match update cards, and then be asked to select your favorite team(s). And finally, if you haven't already, check out Google's amazing Street View tours of the Brazilian stadiums that are about to play host to the angst, happiness and sporting talent of an entire planet.

In this article: facebook, football, google, google plus, hdpostcross, mobilepostcross, soccer, social networks, twitter, world cup 2014
All products recommended by Engadget are selected by our editorial team, independent of our parent company. Some of our stories include affiliate links. If you buy something through one of these links, we may earn an affiliate commission.