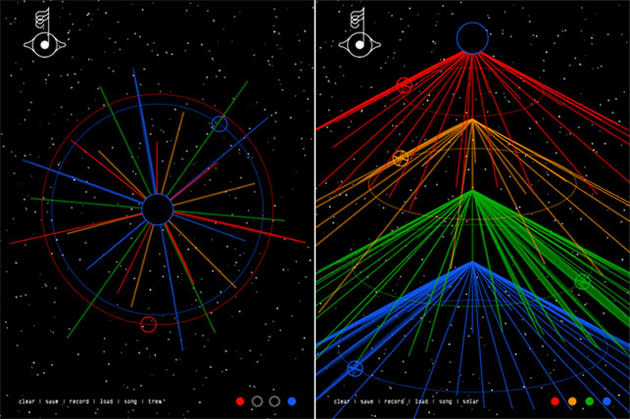 We've seen lots of crazy things on display at the Museum of Modern Art -- a "rain room," a sex toy that works with your phone, a sleeping Academy Award-winning actress. Now you can add "tablet app" to that list. Bjork's "Biophilia," an interactive album released on iOS and Android, has become the first downloadable app to join MoMA's permanent collection. First released in 2011 (and still available for sale), the album allows listeners to "contribute" to songs by playing with interactive on-screen visuals. In "Solstice," for instance (pictured above), the orbits actually allow you to control the string music, with the option to save and record your own version. Ultimately, it was that interactivity that earned the app a spot in the collection. "With Biophilia, Björk truly innovated the way people experience music by letting them participate in performing and making the music and visuals, rather than just listening passively," said MoMA senior curator Paola Antonelli in a blog post.

Of note, this isn't the first app to join MoMA's collection; it's just the first downloadable one. The first app was actually John Maeda's 1994 collection "Reactive Books" -- floppy disks tucked inside physical books. (Oh, the nineties.) "Apps are highly 'collectible' because of their finite or semi-finite nature-they might be connected to live feeds and to the Web, but their infrastructure design is stable and defined, unlike that of websites," Antonelli wrote. As one of MoMA's own collectibles, the app is on display at the museum seven days a week. That said, to spare you the $25 ticket price (and the trip to Manhattan), we'd suggest you just download it yourself for $12.99.

In this article: biophilia, bjork, moma, Museum of Modern Art, MuseumOfModernArt
All products recommended by Engadget are selected by our editorial team, independent of our parent company. Some of our stories include affiliate links. If you buy something through one of these links, we may earn an affiliate commission.