Dyson to go all cordless with vacuums, starting with the Cyclone V10

Earin's tiny wireless earphones recharge while they're in your pocket 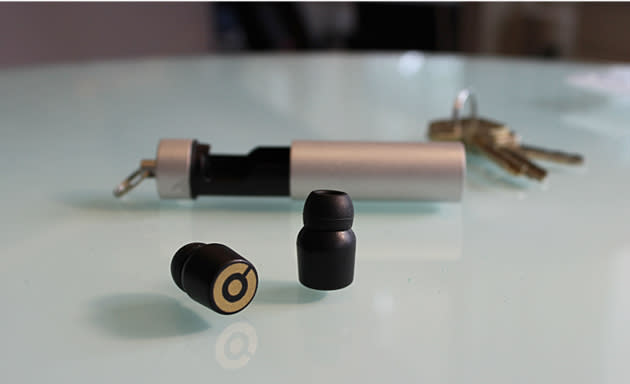 Bluetooth earbuds like Dre's new Powerbeats aren't actually "cordless." They still have a cable running from one bud to the other, which puts a limit on just how tidy and inconspicuous they can be. A group of former Sony Ericsson and Nokia engineers reckon they can go a step further: losing the connecting cable and headset mic in order to create two miniscule, music-dedicated buds with independent batteries and AptX-compatible wireless receivers.

Known collectively as "Earin" -- though it's hard not to think of them as "Earins" -- the buds promise three hours on a charge. Admittedly, that sort of battery life isn't great, especially if it's an ideal spec rather than the dependable minimum, but the engineers have a solution for this too: When not in use, you place the Earins in a small tube that both protects and re-charges them, using its own battery. (An idea that was also put forward as a stretch goal on a similar Kickstarter project, The Dash, albeit for much bigger and heavier buds.) The overall effect actually looks quite practical, which probably explains why the project is already halfway to its £180,000 ($300,000) funding target. A £99 ($170) contribution from you at the Kickstarter page will nudge things along and, assuming the target is met and the whole thing actually comes to fruition, secure you a pair sometime in January 2015.

In this article: cordless, earbuds, earin, earphones, hdpostcross, in-ear, kickstarter, mobilepostcross, video
All products recommended by Engadget are selected by our editorial team, independent of our parent company. Some of our stories include affiliate links. If you buy something through one of these links, we may earn an affiliate commission.