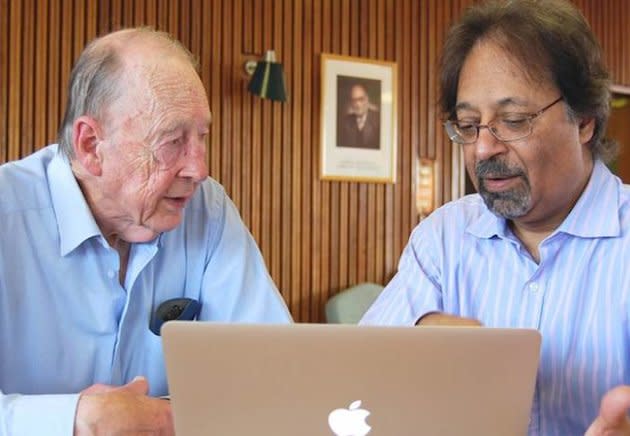 Two UK scientists connected to the discovery of the Higgs boson in 2012 have been awarded one of Britain's highest honors. As part of the Queen's Birthday Honours, professors Tom Kibble and Tejinder Virdee were knighted for their roles in helping find the elusive "god" particle, although they did so in very different ways. Kibble is widely revered for his co-discovery of the Higgs mechanism in the mid-1960s, which helped explain why the particles have mass. Virdee, on the other hand, played a crucial role in developing the concept of CERN's particle-detecting Compact Muon Solenoid (or CMS) in 1990. Decades later, scientists at CERN detected the Higgs boson using CMS and another detector, ATLAS.

The award is particularly sweet for Professor Kibble, after he was overlooked for the Nobel Prize in Physics last year. Peter Higgs, after whom the particle is named, and Francois Englert were chosen to receive the award, excluding the three other physicists who first developed the theory. Tom Kibble was one of the three, with Gerald Guralnik Carl Hagen also missing out. Higgs was quick to highlight Kibble's exclusion, noting that he was "the obvious candidate" to be the third scientist honoured by the Nobel Committee (awards are limited to three recipients). You can read more about how the pioneering work of Higgs, Kibble and Virdee influenced the discovery of the Higgs boson here, here and here.

In this article: cern, god particle, higgs boson, imperial, knighted, large hadron collider, queen
All products recommended by Engadget are selected by our editorial team, independent of our parent company. Some of our stories include affiliate links. If you buy something through one of these links, we may earn an affiliate commission.