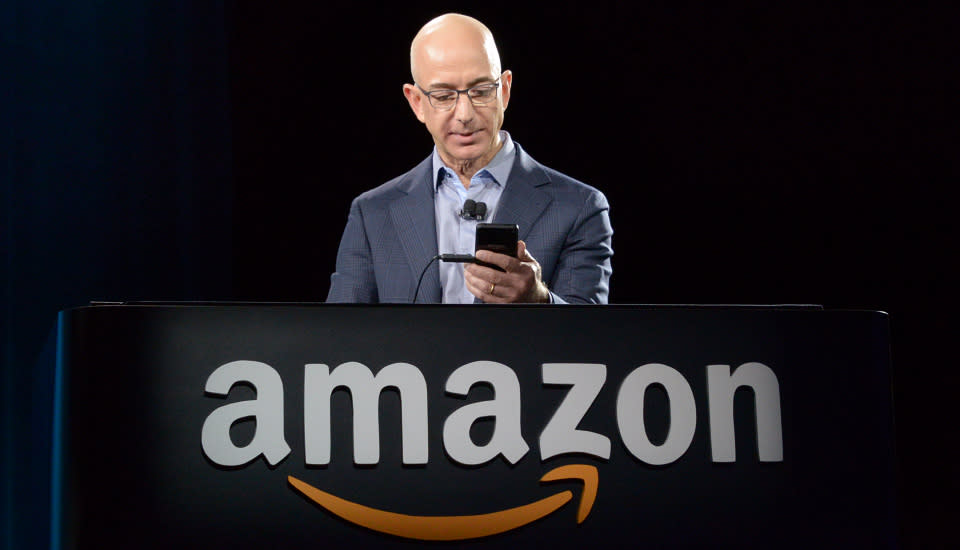 Amazon's first phone is finally here. But what makes it such a curious little device isn't all that (lackluster) 3D, head-tracking stuff; it's Firefly, the company's new visual search engine. Amazon may have been born unto the internet as a modest bookseller, but it's now become a services company: There's the Kindle Lending Library for e-books, plus streaming services like Amazon Instant Video and Prime Music.

Amazon's also a hardware maker. And this time, the company's made something that lets you text mom and use a powerful image-based search system to shop Amazon.com with one touch. It's the Fire phone, and it feels like the inevitable marriage of Amazon's device and services initiative.

The thing to remember about the gadgets that Amazon and Lab 126 (its Research and Development division) craft is that they're, on some level, mere shells. You don't buy a Kindle Fire tablet because it's intrinsically beautiful -- you buy it because you want to read e-books, or watch movies or listen to music that comes as part of your annual Prime subscription. These Fire devices feed directly into the company's myriad services. They're no more than conduits for the sheer amount of content Amazon has on offer.

That said, the physical device still matters. As Amazon CEO Jeff Bezos pointed out today, making hardware is, well, hard and making good, truly valuable hardware is doubly so. The annals of smartphone history are littered with high-profile failures like Microsoft's Kin and both of Facebook's now forgotten phones. It's a problem the Fire phone team grappled with, as Bezos even admitted on stage today. How do you make a smartphone that stands out amidst a sea of competitors with more experience? The answer, Bezos found, had nothing to do with specs.

"The thing to remember about the gadgets that Amazon and Lab 126 craft is that they're, on some level, mere shells."

Amazon's approach to smartphone differentiation was multi-pronged: a focus on real-time customer service with pre-existing features like Mayday and alternative user interface controls and perspectives -- what Amazon calls Dynamic Perspective -- made possible by all those front-facing cameras. But really, it's Firefly that seems like the real game changer for Amazon's Fire phone.

It's hard to overstate just how important Firefly really is. With a single press on the dedicated Firefly key, your Fire phone can recognize the material world around you. Firefly can detect and identify audio from the radio or TV similar to the way a service like Shazam does. It can also scan works of art, DVDs, books or tchotchkes sitting in front of you and return relevant information and shopping links.

Amazon's tried stuff like this before, naturally. Remember the Dash? You could use that little LED scanner to identify your groceries by bar code and stick them in your virtual shopping cart. With the Fire phone and Firefly, Amazon has lifted that restriction on bar codes. In a sense, it's turned the world around you into one giant showroom. Scan what you want -- anything at all, really -- and there's a decent chance you'll be redirected to an info page with a "Buy From Amazon" link mere millimeters away from your fingers.

Firefly's beauty is that it does more than just let you buy stuff; Amazon isn't that shortsighted. It'll show you related Wikipedia articles for objects of interest. It can show you book reviews and recognize phone numbers from street signage. It's just useful. And if you decide you want to buy anything you've discovered, well, it's right there. That lack of friction, that inherent usefulness, that subtle blurring of the line dividing the real world and Amazon's virtual shelves -- those factors could make the Fire phone the most potent selling tool the company has ever created, and you may not even notice it.

"With the Fire phone and Firefly, Amazon has lifted that restriction on bar codes. It's turned the world around you into one giant showroom."

Of course, all this won't amount to much if Amazon can't move massive numbers of Fire phones. In the months and weeks that led up to today's unveiling, pundits called for a phone that merged worthy performance and a rock-bottom price tag. Clearly, Amazon wasn't paying attention to the hoi polloi -- the Fire phone starts at $199 with a contract and it's an AT&T exclusive. Right out of the gate, Amazon's looking at a limited market with that carrier lockdown. Sure, the Fire phone might be a tempting lure for customers that have already gone all-in on Amazon's Prime ecosystem. But with so many impressive smartphones currently retailing for that same price, the Fire phone's likely to go unnoticed by the iPhone crowd Amazon's chasing after.

In this article: amazon, amazon fire phone, amazon phone, amazonfire, amazonfirephone, amazonphone, editorial, fire phone, firefly, firephone, mobilepostcross, poll, wedgies
All products recommended by Engadget are selected by our editorial team, independent of our parent company. Some of our stories include affiliate links. If you buy something through one of these links, we may earn an affiliate commission.