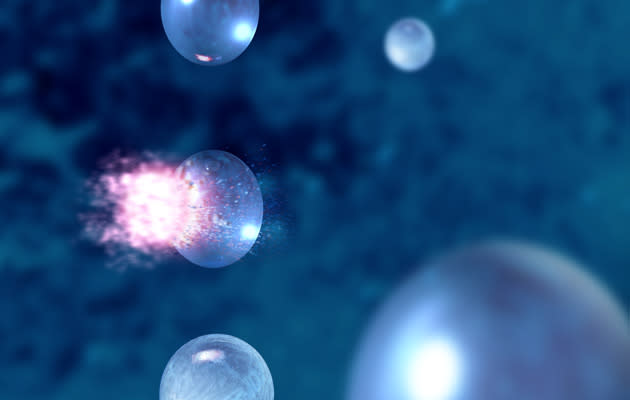 We only remember a few things from science 101, but we're reasonably certain that water boils at 212 degrees (Fahrenheit) and freezes at 32. Scientists at Stanford's SLAC National Accelerator Laboratory, armed with a Linac Coherent Light Source X-Ray Laser, however, have shown us otherwise. Should you be armed with such a device, the normal rules of physics no longer apply, and -- for the first time -- it becomes possible to observe water right down to its molecular level, even while it is supercooled as a liquid to minus 52 degrees Fahrenheit.

Although supercooling water has long been possible, it's been mostly impossible to observe and understand what happens during this process. One of the key things that the SLAC team has discovered, by using the X-Ray laser, is that water is able to, for want of a better word, "sweat." As they sent chilled droplets down a vacuum chamber into the eye of the laser, they observed that some droplets rapidly evaporated, allowing the rest of the water to enter its supercooled state. What's the point in all of this? The atmosphere absorbs different levels of solar radiation depending on if the water is in a crystalline or liquid state. Being able to understand how much of each is floating around the earth at any one time is key to being able to predict levels of climate change -- and, hopefully, finding a way to prevent it.

In this article: Freezing, Science, SLAC National Accelerator Laboratory, Water, X-Ray
All products recommended by Engadget are selected by our editorial team, independent of our parent company. Some of our stories include affiliate links. If you buy something through one of these links, we may earn an affiliate commission.