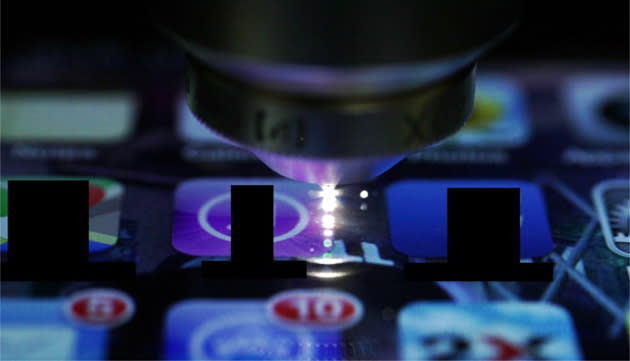 The glass on your smartphone screen doesn't do a lot right now: it lets pictures and touch input get through, and that's about it. It may pick up a few extra talents in the future, though. Researchers at Polytechnique Montreal have developed sensors that can sit under the surface of the scratch-resistant Gorilla Glass used in many mobile devices. Their approach etches optical waveguides into the display, letting it track changes in light. As a result, the screen can do things that would normally require either wiring or dedicated sensors. Your phone could check its temperature using light, and the manufacturer could even embed a unique optical pattern into the glass that lets the phone identify itself; it might get much harder to clone a device (and, presumably, its information).

There are some subtler advantages, too. Since there's nothing but photons passing through the waveguides, they'd be invisible. You could even stack multiple guides (and potentially multiple sensors) without obscuring the picture. In the long run, this could be key to transparent electronics that need many functions hidden from sight.

Despite the involvement of a Corning scientist, there aren't any official plans to include these light sensors into Gorilla Glass. However, Polytechnique Montreal is fully bent on getting its technology into real, shipping gadgets. The invention should be production-ready within about a year, and the team is seeking out companies that could put the sensors into finished hardware. Provided the group finds some takers, you could soon see phones whose displays are as smart as the electronics underneath.

In this article: ecolepolytechnique, glass, gorillaglass, mobilepostcross, optical, photonics, polytechniquemontreal, science, sensor, smartphone, temperature, transparent, waveguide
All products recommended by Engadget are selected by our editorial team, independent of our parent company. Some of our stories include affiliate links. If you buy something through one of these links, we may earn an affiliate commission.