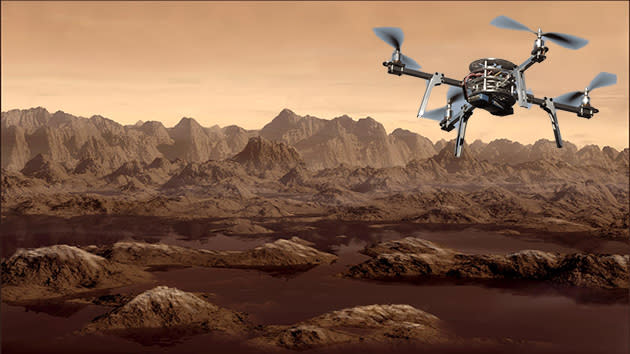 Despite brisk temperatures of -290 degrees F, Saturn's giant Titan moon is of great interest to scientists, thanks to Earth-like geography, hydrocarbon "lakes" and even possible life. Though NASA's Cassini-Huygens probe visited Titan some time ago, the space agency would like to return at some point -- this time with a quadrotor. Using the latest drone and sensor tech, it would weigh less than 10kg (22 pounds), deploy from a recharging nuclear "mothership" balloon and acquire high-res images from close to the surface. With the benefit of that reconnaissance, it could land at promising spots, take microscopic photos and scoop up samples to be analyzed later by the mothership. NASA plans to develop the mission concepts further and design the drone in collaboration with AeroVironment -- so we might one day see if Titan matches the insane artist concepts.

In this article: Balloon, drone, Quadcopter, Quadrotor, Saturn, Space, Titan
All products recommended by Engadget are selected by our editorial team, independent of our parent company. Some of our stories include affiliate links. If you buy something through one of these links, we may earn an affiliate commission.