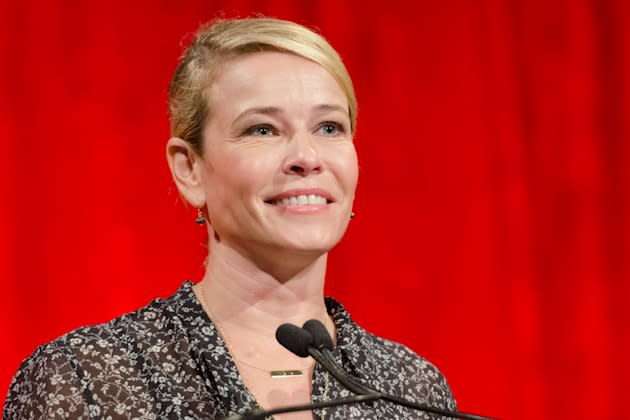 Netflix is adding a new category to its rapidly expanding stable of original content: the talk show. The subscription video service confirmed long-running rumors today, announcing it's signed a deal with comedian and host Chelsea Handler for a show it will begin distributing in early 2016. The "world'’s leading Internet TV Network" plans to create a show for all of its territories that viewers can enjoy however and whenever they like. Before that happens, Netflix and Handler will team up for a stand-up special Uganda Be Kidding Me that will tape tomorrow in Chicago and come to the service on October 10th. She's also going to wrap up the seventh season of her current show Chelsea Lately (not familiar? A sample from its YouTube channel is included after the break.) for the E! network on August 26th and in 2015, create four "docu-comedy" specials for Netflix. The specials will show Chelsea trying to learn about subjects including NASCAR, politics, Silicon Valley and the NBA Draft and of course, lead in to the "First-Ever Talk Show for the Global On-Demand Generation."

Handler and Netflix's Chief Content Officer Ted Sarandos weren't specific about their plans to disrupt late night -- including whether the show will release episodes daily, weekly, or on any other schedule -- but given the success found in drama (House of Cards, Orange is the New Black), documentaries (The Square) and even stand-up, it's ready to be a serious contender in the late night wars. One of the main questions will be how the traditional show format transitions to the service's "anytime" viewing model, but Handler called the Netflix team "the most forward thinking, alert group I'’ve sat down with in ages. No offense to the Shahs Of Sunset." Original Content VP Cindy Holland told The Hollywood Reporter in a recent interview that "we don't have any preconceived notions about what will or won't work on the service"

Off to Chicago. 2 shows tomorrow night for my 1 hour stand-up NETFLIX special. Get your tix on http://t.co/I0V5eAPt9u pic.twitter.com/0Gxjnzdd0e

In this article: chelsea handler, chelsea lately, ChelseaHandler, hdpostcross, late-night, netflix, streaming, talkshow
All products recommended by Engadget are selected by our editorial team, independent of our parent company. Some of our stories include affiliate links. If you buy something through one of these links, we may earn an affiliate commission.