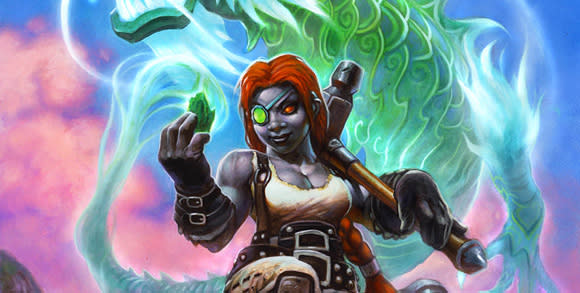 While the August Celestials weren't my favorite reputation grind in Pandaria -- not by a long shot -- I spent most of the expansion fascinated by the Celestials themselves. Where did they come from? What was their purpose in Pandaria? What was up with that statue of the Jade Serpent in the Jade Forest, why was Yu'lon's life bound to it, and were the other Celestials similarly bound?

Blizzard's latest and last offering in the faction short story releases we've seen all expansion is the one I was looking forward to most of all, because of those questions. The Jade Hunters by Matt Burns touches on the story of the August Celestials -- not the creatures themselves, but the organization, and how it came to be. But that's all a backdrop to the far larger story being told, one that finally highlights and talks about the three dwarf clans brought together in Cataclysm.

Oh, and it also talks about that statue that we completely destroyed in the Jade Forest.


But that's hardly the focus of the tale. Instead, we have three dwarves from three different clans: Carrick Irongrin of the Wildhammer clan, Fendrig Redbeard of the Bronzebeard clan, and one Fenella Darkvire of the Dark Iron Clan. If her name sounds familiar, it ought to -- her father was Fineous Darkvire, Chief Architect and a named mob in Blackrock Depths. The Jade Hunters takes place after the events that transpire in Blackrock Depths. Fenella's father is long dead, and she is living under the dark cloud of the legacy his name left behind.

The three dwarves are brought together on a diplomatic mission to go to Pandaria and assist the pandaren in rebuilding the shattered statue of the Jade Serpent. But the three are just as at odds as their clans are, which is really what this particular tale is all about. It's not so much about the Celestials or their origins, although that is certainly touched upon as the story progresses. It's far more about the three dwarves sent on the mission, and that strained alliance that is currently holding Ironforge together.

Matt Burns is also the author of Bleeding Sun, and while Jade Hunters is really well-written, it's thankfully nowhere near as tragic as his other tale. That said, while I enjoyed the story as it stood, I was still left at the end with all those questions about the Celestials. Who they were, where they came from, their purpose in Pandaria. And I don't think those questions are ever going to be answered, at least not to my satisfaction -- we're going to move on, as we do, into a new expansion with new stories to be told, and the Celestials will be left behind.

Yet when all is said and done, maybe that's only appropriate. Pandaria is a land of enigmatic mystery, of triumph over adversity. The tale of the pandaren and mogu empires is one that is reflected by our journey into Pandaria, and by the struggle of every creature to walk the land. Certainly there's a grand, sweeping tale of emperors and dynasties, slaves overthrowing their masters. But these tales are like ripples from a pebble being thrown in a pond. We see the larger ripples, but each of those ripples can be traced, smaller and smaller, until we come at last to the point of contact, the pebble, and the hand that picked that pebble up and let it fly. The individual making a choice, whether it be good or bad, and the consequences that choice creates.

If you look at it that way, the Celestials, as much as they offer guidance and wisdom, matter very little in the overall story of Pandaria. They aren't the ripple, they aren't the pebble, they aren't the pond, and because of this, they don't necessarily warrant an in-depth explanation. Our characters have progressed through the grand tale of Pandaria, and now it's time to move on. It's not a matter of who the Celestials are, it's whether or not the characters in Pandaria's overall story choose to take the lessons of the continent, of the Celestials to heart. And that story, we'll have to wait to see.

As a final edition to the series of faction short stories, The Jade Hunters is almost a quiet epilogue rather than a triumphant clash of cymbals, but maybe that too is only appropriate. We arrived on Pandaria with a clash that rocked the continent and nearly brought it to its knees -- it's far better, when one thinks of that aspect of the story, to take our final bows and leave in silence. You can read The Jade Hunters over on the official site, and while you're there, be sure to check out the other fine tales in the Destination: Pandaria section.