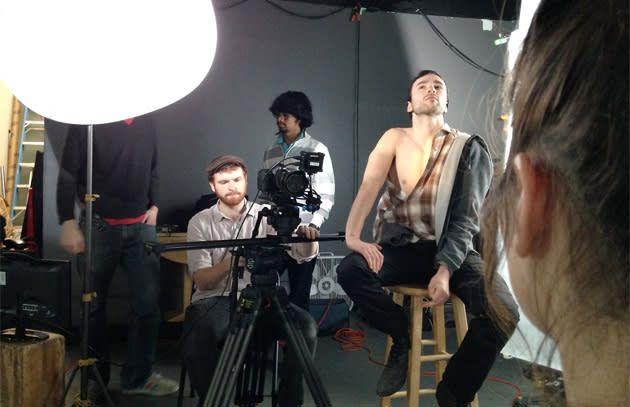 Maybe cord-cutting has gone too far: three New York City filmmakers are publishing their new series exclusively on Instagram. On July 1st, seven 15 second episodes of "Artistically Challenged" will appear on the trio's Instagram account, with 25 additional updates landing every day after July 7th. After 32 episodes (and 8 minutes of footage) the story will be over -- but it's not the only narrative Instagram video has to tell. Earlier this year Adult Swim split an episode of Rick and Morty into 109 bite size chunks and says its building an entire "micro-network" for smartphone audiences.

Artistically Challenged may be making its public debut on Instagram, but it wasn't shot on a smartphone. Early production stills show the project's crew working with DSLRs and proper lighting rigs. The series is being shot professionally -- with a crew of more than 25 NYU alumni and students -- but is being formatted for the small screen in post-production. It's certainly a novel idea, but this probably isn't the future of cinema. Even so, you can catch the series on July 1st right here.

In this article: actheseries, artisticallychallenged, facebook, film, hdpostcross, instagram, movie
All products recommended by Engadget are selected by our editorial team, independent of our parent company. Some of our stories include affiliate links. If you buy something through one of these links, we may earn an affiliate commission.