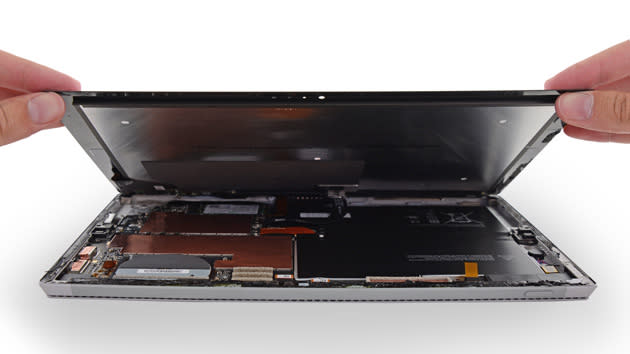 If you had dreams of upgrading your shiny new Surface Pro 3, you'd better shelve them. The crew at iFixit has torn down Microsoft's latest slate, and it proves just as daunting to repair as both of its predecessors. About the only replaceable part is the solid-state drive, and there's a good chance that you'll destroy your tablet trying to reach that component -- even iFixit cracked the glass while removing the display. Just about everything (including the screen) is held in place with adhesives, and unconventional connectors only add to the challenge. You may not mind the unrepairable design given that the Pro 3 is much thinner and lighter than earlier Surfaces, but this definitely isn't the tablet for tinkerers.

In this article: ifixit, microsoft, repair, surface, surfacepro3, tablet, teardown, windows, windows8.1
All products recommended by Engadget are selected by our editorial team, independent of our parent company. Some of our stories include affiliate links. If you buy something through one of these links, we may earn an affiliate commission.